That is the actual error message you get from your Samsung Galaxy S7 if its camera crashes upon initialization and there have already been several owners who experienced this problem. In fact, we received a few emails from #GalaxyS7 and #S7Edge owners since it was released. 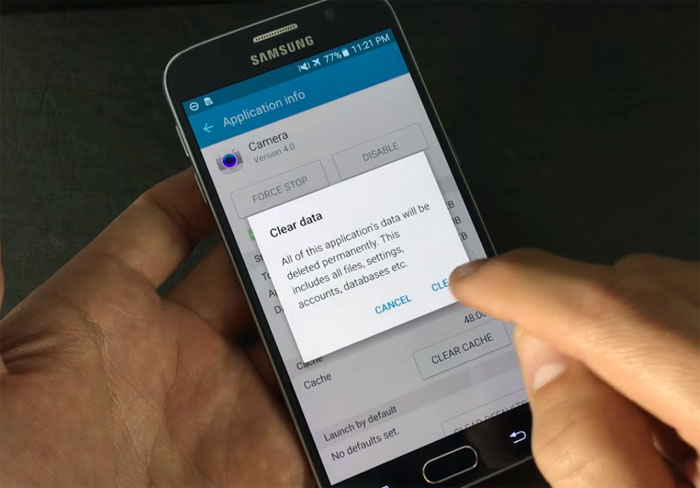 So far, it cannot be considered a bug or a manufacturing defect because most of the time owners that complained about it said they were able to get rid of the error message after doing some troubleshooting procedures.

Based on the emails we received, there were owners who said the error shows up after using the phone for a few days and it pops up every time the camera app is opened. There were some who said the error comes and goes and it can’t be predicted when it would occur again.

If you own this new flagship, it’s better you know the signs and symptoms of this problem so you’d know what to do if it happens to you.

This problem has already been happening since Galaxy S2 so we actually received hundreds, if not thousands, of problems like this. The list below is based on complaints we received and addressed:

Now, before we go into our step-by-step troubleshooting, if you need further assistance later, fill up this form and hit submit to contact us. Make sure you provide all necessary details about the problem. You may also visit our troubleshooting page to browse related problems.

The procedures I will use in this article are based on how we technicians troubleshoot this kind of problem, although there are a few steps that are based on testimonies of owners who encountered and fixed the problem.

I know it’s a compromise but it seems like this problem is connected to the Smart Stay feature that comes with Samsung’s flagship. It uses the front camera to detect the face of the user if it’s enabled and that’s where the conflict starts. Apparently, it’s an issue with the firmware so Samsung can do something about it so perhaps the next update may fix this but meanwhile, here’s what you need to do:

Just in case the first step failed to fix the problem, you need to restart the camera app. Once the error pops up, there’s nothing you can do but touch OK and the app will close itself. Try to open it again and see if the error still pops up and if so, then proceed to the next step.

Step 3: Clear the cache and data of the Camera app

This procedure will rule out the possibility that the cause of the problem is cache- and data-related. Follow these steps:

There are times when the error occurs while viewing some pictures, so in this case, you also need to clear both the cache and data of the Gallery app.

After you did all those steps and the problem remained, it’s time for some firmware-oriented troubleshooting procedures and the first thing you should try is wiping the system cache directory.

If all else fails, there’s a chance you got a defective unit and there’s nothing we can do about it, really. However, it could also be just some corrupt data or files. There’s it’s practical to perform the master reset before sending the phone in for checkup or replacement. But before you actually do that, make sure you backed up everything you don’t want to lose. If you have a microSD card mounted, transfer your files into it and remove it. Also, remove your Google account and disengage the screen lock to make sure FRP or the anti-theft feature isn’t tripped.

Should the problem persist after the reset, it’s time to contact your provider and have it replaced.

I hope this guide can somehow help you troubleshooting the camera failed error on your Galaxy S7. If you need further assistance from us, do not hesitate to contact us by completing this form.