Samsung Galaxy Note 5 (#GalaxyNote5 #Note5) slow and not charging issues are often blamed on faulty hardware and/or accessories. We really can’t blame owners to immediately think their chargers are broken when the phone stopped charging. In fact, we technicians often recommend to check the accessories first before trying to troubleshoot the phone. 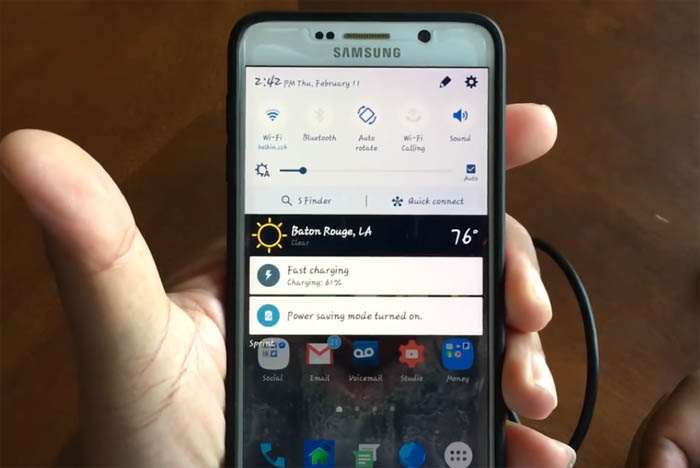 Based on complaints filed by our readers, there’s one thing that’s often left out when it comes to charging issues–the firmware. It plays a great role in charging the phone because without it, the device won’t let the current pass through. It is also responsible in displaying the correct battery percentage as well as how much time is left before the battery is fully-charged.

In this post, I will guide you on how to troubleshooting not charging and slow charging on your Note 5. It’s purpose is for you to know what the problem really is and once you have sufficient information, you can then develop a procedure on how to fix it. However, you should know that there’s no guarantee you can fix the issue on your own. There are always issues that need the expertise of technicians especially hardware-related issues. But even so, your efforts won’t be wasted as you would be able to explain in details what the issue is to the technician.

Just to give you an idea how these problems occur, here’s a couple of complaints sent by our readers who were seeking for assistance:

“Hello droid guy! I really hope you can help me with my problem. I have the Galaxy Note 5 I purchased in November last year. Since I bought it everything was working until as of late when I noticed the device won’t charge at all. That’s right, when I plug it in, it just wouldn’t charge. When I come home from work, I immediately put the phone on charge even if it usually has about 30 to 40% battery left. It has become my habit just to make sure that when I wake up in the morning, the phone is ready for the entire day of use. One day, I woke up seeing it having only 27% battery so I knew it didn’t charge. When I plugged it again it did charge again but yesterday it refused to charge and today it only has 21% battery left and it’s still not charging. What should I do?”

“My Note 5 is just a few months old and just a few days ago it received an update. I of course downloaded it but after that, it started to charge very slow. Before the update, the battery will be charged in about a couple of hours if it’s fast charging about an hour or less depending on how much battery is left. Now, it will take more than 3 hours to reach 60% and even if I left it for hours it didn’t finish charging. What’s happening to my phone? Is there anything I can do to fix this?”

Based on reports and testimonies of owners who encountered this kind of problem, here are its possible causes:

In this kind of problem, since we don’t know what the culprit is, it’s better to rule out one possibility after another. We, however, need to begin with possibilities that can easily be ruled out without much of a hassle and while we encourage you to troubleshoot, remember that it’s the technician’s job to fix more serious issues. So, all we need to do is find out what the problem is and see if we can fix it, if we can’t, then send the phone in for repair.

Step 1: Try charging the phone while it’s powered off

This procedure is applicable to both not charging and slow charging issues. It will also give you an idea if it’s a firmware issue or a hardware problem.

If the phone charges fine when turned off, then it’s most likely a firmware issue but it’s also possible that there are just too many apps running in the background. In this case though, you don’t have to worry so much as the problem can always be fixed.

On the other hand, if the device won’t charge even if it’s turned off, there’s a chance it’s a hardware problem but it doesn’t mean you won’t troubleshoot further. Who knows, it might just be a system crash issue. That’s right, if the firmware crashes, the device won’t be able to charge.

Step 2: Do the Forced Reboot procedure regardless of the outcome of the first step

Either the phone charges or not when powered off, it’s recommended you do the forced reboot procedure. It’s the equivalent of the battery disconnect for Galaxy models with removable batteries.

If the phone was charging slow even if turned off, there’s a chance that it’s just a firmware issue and while the normal reboot can often fix it, the Forced Reboot refreshes everything.

In the not charging case, as I mentioned in the first step, there’s a chance the firmware just crashed and since it plays a big role in the charging process, the hardware can’t let the current pass through when the firmware isn’t responding. To fix this issue, the forced reboot is necessary and here’s how you do it…

Press and hold the Volume Down and the Power keys together for 10 to 15 seconds. If it were just a minor firmware and/or hardware issue, the device should reboot naturally after doing so.

Step 3: Inspect the power adapter and try a different one if necessary

It’s logical enough to assume that the charger is the culprit when your Note 5 isn’t charging. So, after doing the first two steps, it’s time you paid attention to it.

The first thing you have to do is physically inspect it. Look into its port to see if there’s a pin that’s bent or misaligned. You can always use a toothpick to straighten out misaligned pins. If it looks fine, try to smell for some remnants of burnt electronic components. You can tell immediately if something burnt from the inside.

Assuming the power adapter doesn’t manifest any sort of problems, then it might just have been busted and since you can’t test it out, all you need to do is borrow or buy a new power adapter. If the phone charges with the new one, then it’s confirmed that the original one is damaged.

You may also try to check the USB cable if it’s broken and check both ends if some of the pins are bent. You can separately buy a cord or buy the entire charging set.

Step 4: Try booting in safe mode to see if the phone charges fine

After physically inspecting both the power adapter and the USB cable and you haven’t found anything unusual, it’s time you went after third-party apps and services that are running in the background.

Boot your Galaxy Note 5 in safe mode to disable all of them temporarily. This procedure is very much effective if your phone drains its battery rather than charges when plugged in and slow charging issues. Follow these steps to boot in safe mode:

If your Note 5 charges fine in safe mode, then the problem has something to do with third-party apps. Perhaps, there are just too many of them running in the background or some of them may have gone rogue and keep crashing. This is very much possible if you just got the firmware updated. Proceed to the next step to fix it.

RELATED POST: Galaxy Note 5 not charging and won’t power on

Step 5: Try wiping the system cache and then do the master reset

For firmware-related charging issues, it’s always advisable to delete the system cache first. Corrupt caches may affect the hardware as well and may hinder charging. There have been so many reports that wiping the cache partition fixed power and charging-related issues. Therefore, it’s worth doing it and here’s how…

Lastly, if the problem remained after deleting the system cache, then you have no other option but to perform the master reset. I understand the hassle of backing up your files but you have no other choice at this point. The reset will rule out the possibility that it’s a firmware issue, so here’s what you need to do…

Step 6: Seek help from a technician

If you’ve done everything in this post and the problem remained, then it’s time you sent the device for repair. At least now, you know the problem is on the hardware and you can explain everything you did to the technician. Don’t worry though, slow charging issues are often minor ones and they can easily be fixed and as long as the device didn’t incur liquid and physical damages, you can have it fixed under warranty.