There are plenty of TV boxes available in the market today. Prominent among them are the ones that run on the Android platform. This gives customers a distinct advantage over other TV boxes, thanks to the versatility of the Android platform that gives you access to thousands of apps and games suitable for the bigger display. Another thing to consider when buying an Android TV box is pricing. Thanks to a handful of manufacturers, there are competitively priced Android TV boxes in the market today. One among them is the MXQ Pro 4K Android TV Box that has been making quite some noise in the market. With a price tag, it makes sense to have a closer look at this offering. 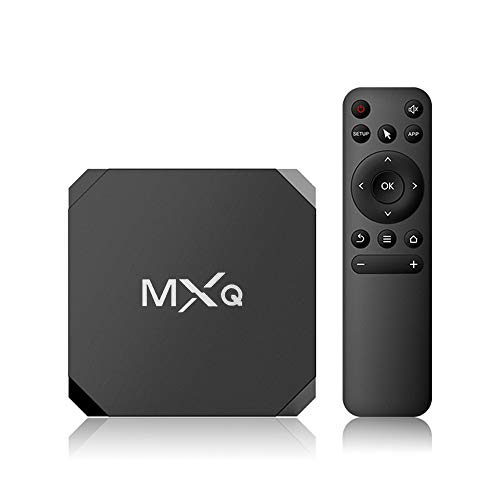 This is an area where the MXQ Pro 4K absolutely doesn’t compromise. It comes with a quad-core processor on board clocked at 2.4 GHz. It also comes with 1GB of RAM, which may just be sufficient for most apps and games. There’s 2GB of native storage as well, which isn’t cause for concern as the company also provides 2 High speed USB 2.0 slots to connect flash drives and external hard drives.

It also comes with an HDMI 2.0a port, allowing you to connect the set top box to high-definition monitors or televisions at home. Moreover, peripherals like keyboards and mice are also supported by the MXQ Pro 4K. There’s a Micro SD card slot on board the MXQ Pro 4 as well, thus offering plenty of connectivity options for the customers. The company offers support for 2.4 GHz Wi-Fi by default, which is important for any streaming device.

As the name makes it apparent, this offering also supports 4K streaming by default, making this one of the cheapest 4K streaming boxes available in the market today. Streaming content using paid and unpaid services are a breeze on this device, as expected.

However, the Android TV box can freeze up at times during GPU heavy tasks, like while playing games with high frame rate. The company offers a remote for the MXQ Pro 4K, which can come in handy. The remote works on 2 x AAA batteries, which will last long enough for you to forget about replacing them. The company doesn’t offer the batteries, however. As a rule, it is always recommended to get rechargeable batteries to eke out more juice out of each battery.

As is the case with most Android TV set top boxes, this one too comes with a pretty small form factor, which is bound to give you plenty of free space on your entertainment centre. The construction is plastic here, although it’s definitely not going to affect the performance or durability of the MXQ Pro 4K. The aforementioned remote, however, looks pretty cheap and could surely be done better.

The company mentions that the remote is made using imported skin-friendly material which also makes it sweat proof. Considering the price that the company is selling this offering for, the design of the remote is something that can be overlooked by most.

The company only offers the MXQ Pro 4K in Black, so there’s a serious lack of color options here. However, we don’t expect this to be a dealbreaker for many. In terms of the overall design, however, the set top box is definitely not one of the best looking out there. The company also provides and HDMI cable and a durable power adaptor to power up the set top box. The box also comes with a standalone ethernet port on the back, helping you establish a standalone internet connection on the device.

In terms of software, the company mentions that this product runs on Android 7.1 Nougat. This is quite unfortunate as Android 5.1 is relatively older in the market, while several other Android TV boxes offer Android 8.0 Oreo. The company has used custom modifications to the user interface, although it’s nothing to write home about. It’s very identical to what we see on so many Android TV boxes, so you might not be surprised here. It’s unlikely that the company will officially supported Android updates, so you’re going to have to make your peace with Android 7.1 here.

Fortunately, you will be able to find all your favorite apps or download new ones quite easily. Icons are too flashy for anybody’s liking, and we would have liked a more minimalistic approach. However, this opinion is subjective and might differ with each individual. The best part is that you can always your own custom launcher from the Play Store, which pretty much negates the bad UI.

What’s particularly important with the MXQ Pro 4K is the fact that it’s extremely easy to set up, which is an area where the software definitely deserves credit. All your favorite communication apps like Skype, Facebook, etc can be used here and you can also initiate video calls if you have a camera attached on your monitor/television.

The quad-core processor on the MXQ Pro 4K doesn’t hold up during streaming, with even high-quality content loading relatively quickly. However, this could plainly be down to the kind of internet connection you have at your disposal. Kodi users will particularly love this offering as it can stream on Kodi without skipping a beat. Most users prefer cheaper Android TV boxes primarily to stream content using Kodi, and it’s relieving to know that this has been taken care of by the company.

It is important to remember that some internet service providers might be blocking access to Kodi, so users who still want to enjoy content this way are expected to install a capable VPN profile on their device. You can still stream stutter-free content from paid providers like Netflix, Hulu, Amazon Prime Video, and others. Furthermore, customers get support for TrueHD and DTS audio with the set top box, making this ideally suited for watching power-packed action blockbusters. Picture quality is also crystal clear and smooth, while it’s enjoyed best on a 4K television.

While the MXQ Pro 4K is excellent for streaming and opening smaller applications, it can sometimes hold up while gaming as we’ve mentioned above. One glaring omission here is Bluetooth, which means you cannot add gaming controllers of your choice to the device. This we feel will make it less appealing to those seeking an Android TV box solely for gaming. Keyboard and mice work perfectly here, and can be viable replacements for the default remote supplied by the company.

Despite packing a powerful quad-core processor here, the MXQ Pro 4K doesn’t heat up, even while gaming or streaming content at maximum resolution. This means there are contingencies in place for overheating and other potential issues that could surface on an electronic device.

How does this fare against the competition?

It is important to remember that the MXQ Pro 4K resembles a lot of other products currently listed on Amazon. This makes it a level playing field, regardless of the features they’re offering. What’s important to note, however, is that the MXQ Pro 4K is priced significantly lesser than some of its identical looking rivals. This gives it a distinct advantage over the competition and also the eyeballs from prospective buyers. So it goes without saying that this offering is in a league of its own, standing tall against the competition.

As you can see, we have weighed in multiple factors here, thus coming to a proper conclusion. And it’s my firm belief that the MXQ Pro 4K is an exceptional device if you’re using it just for Kodi. However, if you’re looking for a comprehensive streaming box that works with pretty much any service, something like the Amazon Fire TV is recommended. It must be pointed out that the price differential isn’t too great between this offering and some other popular Android streaming boxes/sticks. However, Kodi remains one of the priorities for several customers who buy one of these, and the MXQ Pro 4K hits a home run in this department.

Games and apps work fine too, allowing you to use your monitor or TV screen as an enlarged smartphone/tablet display. Since this is a cheap Android TV box, you will also find a lot of bloatware and apps that you didn’t install, although you can easily clear them up from your system.

Although one would hesitate at the thought of just 8GB to store apps, the SD card slot solves this issue to a great extent. While Kodi comes preinstalled, we’re not big fans of annoying add-ons that come along with it. But since you can always reset and start from fresh or reinstall Kodi altogether, this shouldn’t particularly worry most users.

If you’re looking for a more powerful offering that can also offer gaming and better GPU performance, you’re definitely not going to find it here.