There are a handful of smartphones out there today. While most modern day smartphones come with the same kind of feature set on board, not all of them are similar. The core functionality remains the same, however. I’ve personally noticed that not a lot of seniors (like my grandparents) like using modern day smartphones. The standard low-end phones are too small for them and requires a lot of work to operate. This is a problem that’s seen across the board with regards to seniors, and luckily, some manufacturers have taken it upon themselves to fix this.

We have something known as senior phones in the market today. These phones are designed for the senior citizens, and as such, come with a very decent feature set on board. However, senior phones are not usually touchscreen based. But as the industry evolved, we have a handful of senior specific touchscreen phones as well. The best part here is that the user interface is completely different, and the icons and themes are suited for those who don’t like reading on small fonts and icons. We’re going to talk about the Jitterbug Android phone today, which fits all the aforementioned criteria and more. This is a massive touchscreen phone, although the screen size shouldn’t deter customers since it allows for easy one handed operation. Let’s have a detailed look of the device for more details. 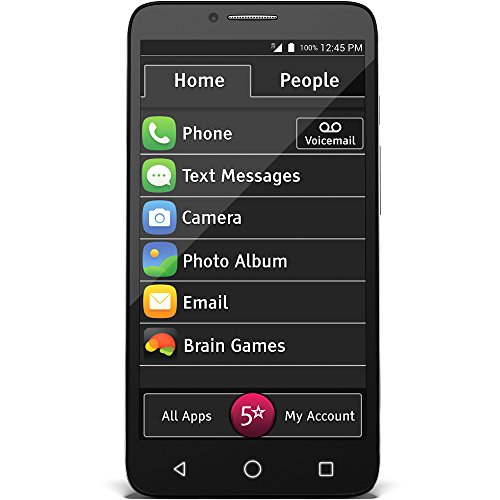 The Jitterbug is a pretty decent handset, and comes with a pretty handy display as well. Truth be told, the display is where all the action happens, so it’s probably the most important feature of the phone. The Jitterbug Smart uses a 5.5-inch display panel, which should be ideal for any senior in your family. The display is evenly distributed thanks to the large icons clearly stating what they’re meant for. There are only two screens on the display at any given time – Home and People. The Home Tab comes with details on the apps you have, while the People app is simply the contacts section of the device.

In terms of design, it won’t win any awards, but that’s not necessarily a concern since that’s not supposed to be its purpose. It’s a standard 5.5-inch bar-like design, but the manufacturers have been wise enough to offer rounded edges to make it easier to operate with just one hand. The device is 172 grams thick, however, which means you’re not going to lose this easily. This is one of the primary complaints seniors have with lightweight smartphones. Even in the event of loss, the company has multiple packages wherein you will be offered with a free replacement.

When we’re talking about a smartphone like this, the camera is pretty much the last thing you would expect. However, the company has been kind enough to give a proper camera on the back to let your grandparents send you videos or photos as they please. There’s no front camera here, though, so customers will have to stick to the rear camera. It’s a standard 5-megapixel unit, so don’t expect some great images here. However, for the kind of feature set that it’s supposed to offer, the Jitterbug does the job pretty well, and some.

Since this is a senior oriented phone, the company is offering a multitude of safety features by default to keep your grandparents safe. There are multiple packages to choose from ranging from access to emergency support, nurses, and even getting you a replacement device if it’s stolen or damaged. The phone, by default, comes with an app called 5Star, allowing you to get the best access to the aforementioned emergency services. Customers, however, might be required to pay a fee to use some of these features. All the packs available from the company can be viewed from the greatcall website.

The customer support team of Greatcall deserves a special mention too as the company claims that representatives will be available at any given point. The customer service team is based out of the U.S., so you can be assured of getting a quick response rather than being directed to a global team. All these factors combined make the Jitterbug a pretty exciting phone for the seniors.

You can get data for as low as $17.48, and customer reviews suggest that the company’s voice and text rates are quite affordable too. Overall, the Jitterbug has you covered in almost all areas. The handset appears to be 4G LTE compatible too, as per one of the sellers, which is great news and will allow seniors to get decent data coverage regardless of where they are located in the U.S. You will not have to sign contracts or cancellation fees and can directly start using voice/data on the device right away.

There are a handful of brain testing games up for grabs as well. These will help the seniors pass some time, while also exercising their brain. The UI is very easy to manage, and will not confuse users all that much. The navigation is easy, and since all the icons are laid out quite clearly, it should be a hassle free process overall. The phone also comes with 8GB of storage on board, which can be increased by up to 32GB using a microSD card. The company doesn’t mention the battery capacity available with the device, it should last almost an entire day on a full charge.

One thing I like is that when you get the phone, you can set the phone to work in regular mode or in a senior mode. The normal mode will have all the standard functionality of a regular handset sans the big icons and fonts.

The handset is available for just about $99.99 from the company’s Amazon retail page. Considering the kind of features that it offers by default, we feel this is a very attractive price tag. The company offers additional services along with the phone, obviously, which shouldn’t set you back by much either. All things considered, this is probably the best phone you can get for seniors around you. It’s big, tough to lose, and has all the features that are required by seniors.