Hey guys. In this post, I will tackle a couple of problems sent by our readers regarding the Samsung Galaxy S7 Edge which reportedly started to have apps-related issues shortly after it was updated to Android Nougat. 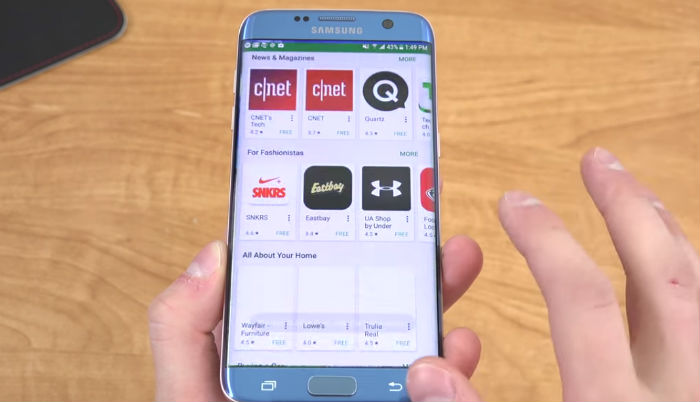 App problems are often rooted to the firmware but there are times when it’s just as minor as an app crashing or stopped working. In which case, you can easily fix it by doing some procedures that directly address the problem. However, if it’s an issue with the firmware, then there’s a lot more you need to do in order to prevent apps from crashing again.

If you own a Galaxy S7 Edge and are currently bugged by a problem or two that has something to do with apps, then I suggest you continue reading below as this post may be able to help you fix the problem. But please proceed at your own risk because a lot of things can happen while you’re troubleshooting.

However, if you are trying to find a solution to a different issue, then visit our troubleshooting page for we have already addressed hundreds of problems with this device since it was released. Try to find issues that are similar with yours and use the solutions and troubleshooting guides we suggested. If they don’t work, however, contact us by filling up our Android problems questionnaire. Just give us information and we’ll help you find a solution.

Problem: Hello guys! I have an issue with my phone. It’s a Galaxy S7 Edge I got 4 months ago and just last week I’ve updated it. I think it now runs on Nougat or Android 7. I didn’t have any issues downloading the update, in fact, it went so smooth and I was able to use my phone for a few days until I noticed that its performance dropped and now it keeps showing notifications or warnings about some apps that stopped working. Not sure what I have to do but if you can help me, that would be great. Thanks.

Troubleshooting: Taking into consideration that this problem started after updating your S7 Edge to Nougat, it’s possible that some of the caches of those apps or even the system caches got corrupted. Or, it could be just a minor issue with the firmware that affects some of your apps. Here’s what I suggest you do:

Step 1: Reboot your phone in safe mode to know if those apps still crash

Once the phone is in this mode, observe closely if there are still apps that crash and if so, then move on to the next step as it might be an issue with the firmware or one of its services. However, if the problem is fixed or if the apps don’t crash in this mode, then the ones that are crashing might be third-party apps. Try to find out if there are available updates for each of those that crash and update them. You may also uninstall them one by one until the problem is fixed.

Step 2: Delete the system caches so they will be replaced with new ones

Assuming the apps are still crashing in safe mode, we might be facing a problem brought about by some corrupt caches. In this step, we want you to delete all the system caches in your device so that they will be replaced with new ones. You can do so by wiping the cache partition:

If the problem still persists after this, then you have no other choice but to reset your device.

Step 3: Reset your Galaxy S7 Edge as it might be an issues with some system files or data

Firmware updates may also corrupt some of the files and data in your device and that may also result to the crashing of several apps not to mention your phone may slow down noticeably. At this point, it’s better that you reset your phone, after all, it’s now running a totally different, updated firmware. But before that, make sure you backup your files and data especially ones that are stored in your phone’s internal storage and make sure to disable anti-theft feature to prevent your phone from locking you out after the reset. Here’s how you do it:

After disabling the anti-theft feature, follow these steps to finally reset your phone:

Problem: Hi there Ever since I installed the latest android version I have problems with notifications on my S7. For example, a calendar notification just pops up for not even have for a second and then just disappears. Threema chat notifications don’t work at all. Gmail push is not working properly either. Are there others with problems since the last update? Thanks! Chris

Solution: Hello Chris, this issue is common not just in S7 Edge but to all devices that has an android firmware. Although system update can fix bugs and other issues in the system but sometimes it may also be one of the causes that several issues occur in the device. So, the best thing that you should do now is to isolate the problem by following the step-by-step troubleshooting procedure that we provided.

Step 1: Perform force reboot, for it might be a system glitch

If the problem occurs for the first time on your phone, then performing the force reboot procedure can help you fix it. This method will refresh the system of the device and eliminate those unused apps that runs in the background that complicates the other services that caused it to crash. To perform the method, press and hold the Volume Down and Power keys together for 10 seconds until the device boots up. So, after the force reboot try to open those troubled apps and see if the problem is still happening. If so, perform the next procedure.

Step 2: There might be third-party apps triggered the issue

This time, we have to determine if one of the downloaded applications you’ve been installed triggered the issue on your handset. By booting it in safe mode, the pre-installed apps will be running in the system alone and all third-party apps will be disabled temporarily and if the problem is not happening while in this mode, then a third-party triggered it. You can uninstall  each app you downloaded until the issue is fix.

Step 3: Clear the cache and data of the troubled app

Usually, it is because of the update a big possibility that the cache and data of the app were become outdated and corrupted and caused the app to crash without apparent reason. In this instance, we recommend you to reset the app so that the device will create newer caches and data.

After doing so, observe closely if there’s changes on its performance. If none, then move to the next step.

Step 4: Clear the system caches for it may be corrupted

This method is similar to the previous procedure you performed the only difference is that, system caches works in the firmware so that next time you will open a website, app and assign some task on your phone it will be more easier for the device to locate the files. However, if those files were corrupted, then that might be reason that your phone could not perform the task properly.

So, after performing all the methods and the issue still not fix, then there might be a major factor caused the problem. The best thing that you should do is to reset the device. This method is more complicated compared to other procedures you performed because all saved files in the device will be deleted once you go through. Before you do the steps we recommend you to create first a backup.