When a powerful device like the Samsung Galaxy S6 Edge gets stuck on the boot screen, it is most likely that it’s experiencing firmware-related issues. During boot up, all necessary files should be loaded and all services should be fully initialized so the phone can work properly. If those files or services aren’t loaded, things like this could happen. 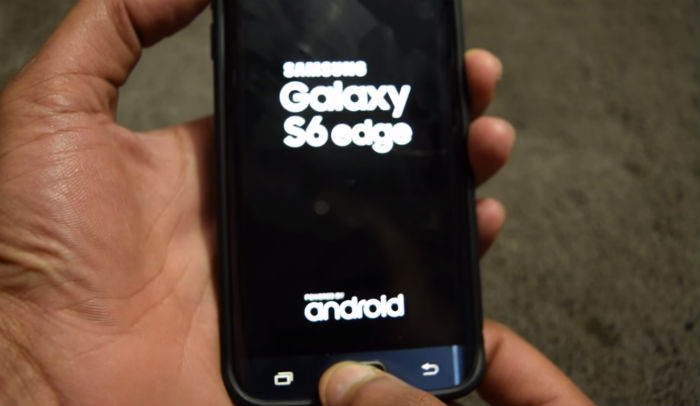 So in this post, I will help you fix the problem. We will try to rule out possibilities to be able to tell if we can fix the problem on our own without any help from a tech. It doesn’t mean we don’t want tech to check out your phone, we are just trying to save you from a lot of trouble and hassle. So, if you own this phone and it’s currently stuck while booting up, read on as this post may be able to help you.

On the other hand, if you have other issues with your phone, try to visit our troubleshooting page for we have already addressed a lot of issues with this phone and odds are that we’ve already answered similar problems. Try to find the same problems and use the solutions or troubleshooting guides we suggested. If they don’t work for you or if you need further assistance, then contact us by completing our Android issues questionnaire.

Problem: Hello guys. Good morning. I’m reaching out to you because I have a problem with my phone and I badly need your help or advice so that I can try fixing it if possible. My phone is a Galaxy S6 Edge which has been with me for almost a year now. For some reason, it would no longer boot up to the home screen like before. Either it gets stuck on the S6 Edge logo or a black screen after that. Not sure what I did or what I have to do to fix this. Can you help me with this? Thanks.

Troubleshooting: We have to rule out the possibilities until we can tell what the cause of the problem is and what needs to be done to fix it. Without further adieu, here’s what I suggest  you do:

Step 1: Try to soft reset the phone to rule out possibility of a system glitch

More often, glitches are actually minor app- or firmware-related problems and while they tend to affect the overall performance of the phone, they can easily be fixed provided there’s no other serious problems in the background that triggered them.

So, the first thing I want you to do is try to do the soft reset procedure. You Galaxy S6 Edge doesn’t have a removable battery, therefore, all you can do is press and hold the Volume Down button and the Power key together for 10 seconds and wait to see if the phone can get past the boot screen.

The soft reset will perform the simulated battery disconnect and refresh your device’s memory but there’s no guarantee the problem will be fixed. So, if the phone can’t still boot up successfully even after the soft reset, move on to the next step.

Step 2: Make sure third-party apps have nothing to do with it

There have been a lot of cases that we’ve encountered wherein third-party apps caused the system to crash leaving the phone unresponsive. But the thing about issues caused by third-party apps is that they can easily be fixed. So, to confirm if the problem is due to some of the apps you installed, attempt to boot your device in safe mode by following these steps:

If successful, then it’s clear that the cause of the problem is one or some of the apps you downloaded and installed. Therefore, you need to find the app that’s causing the phone to not boot successfully and uninstall it. You may have to uninstall more than one app and reboot your phone countless times before you can say the problem is fixed. This is how you uninstall an app from your S6 Edge…

If, however, the phone still gets stuck on boot screen while starting up in safe mode, then the next step might help.

When booting in recovery mode, all hardware components will be powered up but the Android interface won’t be loaded and in this case, your phone may be able to the mode without being greeted with any issues. Once successful, you can then perform a couple of procedures that might fix the problem. So, here’s how you boot your S6 Edge in Recovery mode:

If successful, you can try to wipe the cache partition or even do the reset to see if you can make the phone boot up in normal mode and reach thee home screen. However, if the problem still persists after that, then you should have the device checked by a technician.

Problem: I’m not sure how to open this phone to take out the battery. I did turn it off and restart it but that didn’t help. I have an S6 Edge. I was in the middle of a phone call, the call dropped and I cannot make or receive phone calls. Not sure if it has anything to do with it but I did a Samsung update yesterday. I never had this problem before. I’m very upset that I cannot make a call as my son is a Marine and I don’t get to speak to him very often and now I was for off from him!

Solution: Well, as you stated, the firmware had been updated so it seems like some of the files on your phone were messed up and that may be the reason that it could not boot up completely. But since we are not sure what the issue is, all we need to do is to first focus on the software department of the device by performing the basic troubleshooting methods. To isolate the problem, just follow these procedures:

Sometimes, it is because of not enough power in the battery that the device could no longer power up the components inside and that’s the reason your phone won’t turn on. What we have to do now is to verify if the battery is defective or not by charging it for 10-15 minutes. Through this method, you are not just charging it but also trying to figure it out if the current is flowing in the circuit board of the device. If the LED above the screen is blinking and the charging icon is showing, then most likely it is a firmware issue that has an issue and prevents the device for not booting up. However, if it is not responding after several minutes of charging you can immediately your phone to the nearest shop in your area for your phone might have a hardware problem.

Assuming that the device is charging normally, then it’s time for you to check if the issue is not caused by a simple glitch. Through force reboot procedure the device’s system will be refreshed and close all unused applications that runs in the background. So, while it connected to the charger just press and hold the Power and Volume Down keys together for 10-15 seconds. If it boots up, obviously it is just a glitch in the system caused it. But after doing so and still not responding, then you can follow the next step.

Now, we have to figure it out if the device can boot up successfully in safe mode because if not, there may be some conflicts in the system. Take note that this method will temporarily disable all downloaded applications and only the pre-installed apps will run in the system. If it boots up without a problem, then there might be a culprit caused it and you should find and uninstall that one to fix the problem.

Step 4: Delete the System cache of the phone

As the new firmware had been installed, it is not far that the system caches were become outdated and creates conflict to the system and makes the firmware to crash without apparent reason. Through this method, the cache directory will be back to its factory default so that the device can create newer files that is compatible to the new system.

After deleting the system caches observe closely if your phone can boot up successfully. If not, then it might be a major software issue and you can jump to the next method for further troubleshooting.

Since, all procedures haven’t fix the issue the best thing that you should do is to bring back the device to its factory settings. But remember that in resetting your phone all will be erased like: contacts, music, photos and all third-party apps you installed. So, before you proceed makes sure to create a backup or transfer all of it to your personal computer or SD card. Here are the steps to reset your phone:

After you do all the procedures and the issue still persists, look for a technician in your area and let it fix.