There are several factors that can cause the Fitbit Sense to not sync with your account or your smartwatch. It could be due to a Bluetooth connection issue, a software glitch, or a setting issue. You will need to perform several troubleshooting steps to fix this.

The Fitbit Sense is a premium smartwatch that offers a lot of excellent health and fitness tracking features. This device not only has an FDA-approved ECG sensor and blood oxygen reading but the ability to measure electrodermal activity and skin temperature. Some of the features of this Fitbit device include a color AMOLED touch screen, Bluetooth, WiFi, GPS, and up to 6 days of battery charge.

How do I get my Fitbit sense to sync?

One of the issues that you might encounter with your Fitbit Sense is when you are unable to sync its data to your account or connected smartphone. This can be a frustrating experience if you are in a hurry analyze your data.

The first thing you will want to do in this case is to restart both your Fitbit device and smartphone. This will refresh the connection and operating system of both devices.

To restart the Fitbit device

To restart the connected smartphone

Press the power button until the phone turns off. Wait for a minute before turning it back on.

When both devices are turned on they should automatically connect via Bluetooth if they were connected previously. Try checking if both devices can sync.

You can force the Fitbit to sync by swiping down on the Fitbit app home screen then release. You will see a turquoise line worm its way from left to right just above the main tracking panel.

Solution 3: Reset the Bluetooth connection between the Fitbit Sense and connected smartphone

There’s a possibility that the problem is caused by issues with the Bluetooth connection between your watch and the phone.

Go to your phone’s Bluetooth settings and forget the Sense connection. Scan for any new Bluetooth devices then connect to the Sense again.

Try to check if the sync feature now works.

Solution 4: Force quit the Fitbit app on the connected smartphone

Sometimes the problem can be caused by issues with Fitbit app on the connected smartphone. Try to force quit this app then check if the issue still occurs.

You may need to select See all apps to view all opened applications.

Tap the application you wish to force close.

Confirm your decision by selecting OK.

Swipe up from the bottom edge of the screen and pause in the center of the screen. The multitasking view will now display all your recently opened apps.

Swipe right or left through the list of running apps and find the app you want to quit.

To force quit an app, swipe up on the app’s preview.

Solution 6: Reinstall the Fitbit app on the connected smartphone

Sometimes this issue can be caused by a corrupted Fitbit app. If this is the case then you should uninstall the app from the connected phone then install a fresh version from the Google Play Store or App Store.

There’s a possibility that this problem is caused by a software glitch. To eliminate this possibility you should consider doing a factory reset. 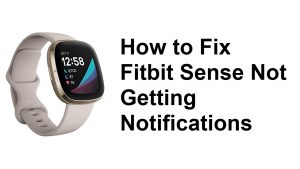