Without a doubt one of the best smartphone models that was released in 2016 was the #Samsung #Galaxy #S7. This phone has a similar design to its predecessor but comes with several improvements which makes it the better device. Some of the outstanding features of this phone include the inclusion of a microSD card reader for easy storage expansion, waterproofing and dustproofing to protect the phone from the elements, and a dual pixel 12MP camera that takes DSLR quality photos just to name a few. Although this phone is being used by a lot of people as their reliable daily driver there are instances when certain issues can occur which we will be addressing today. In this latest installment of our troubleshooting series we will tackle the Galaxy S7 screen black with blinking blue LED issue & other related problems. 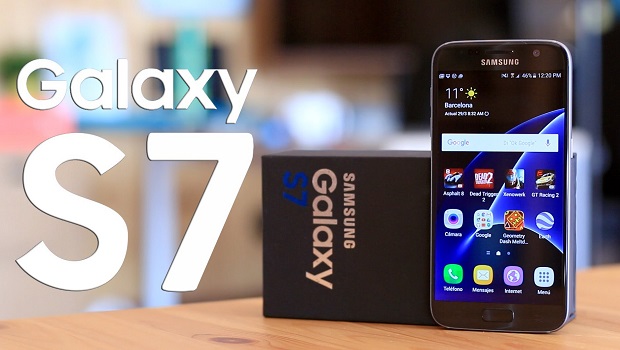 Problem: I can not turn my Samsung galaxy s7 on. The screen is black and the little alert light is blue and slowly fades from bright blue to a blue green back to blue. I’ve tried to reboot it every which way but it won’t work. Also before it shut off and stopped working a blue screen appeared and said it was updating and not to turn off but I did because I didn’t know what it was.

Solution: The first thing that you need to do in this particular issue is to make sure that the battery of your phone has sufficient charge. Charge the phone first for at least 20 minutes using its fast charger. If the phone does not charge then perform the steps listed below.

Once the battery has some charge it’s time to do a simulated battery pull. You do this by pressing and holding both the power and volume down buttons for at least 10 seconds. Your phone should restart after this.

If the issue persists then try to start your phone in recovery mode. From here you will need to do a factory reset. Take note that the reset will erase your phone data.

Should the above steps fail to fix the problem then you will have to bring your phone to a service center and have it checked as this might already be caused by a hardware component that is failing to work.

Problem: Moisture detected when charging. It has not been in contact with water ever since it was bought. Is it possible that the samsung vr can cause the issue?

Solution: Your phone will usually display the moisture detected error when charging whenever it detects that water or moisture is present in the charging port. Your phone won’t charge during this scenario to protect the circuit from being shorted. Since you mentioned that you didn’t get your phone wet then the problem could be caused by another factor that is triggering the phone to raise this error message.

What you need to do first in this case is to clean the charging port of your phone. Make sure to remove any dirt or debris stuck in this port as this would usually lead to this type of problem. Check if the issue still occurs. If it does then try using a different charging cord and wall charger.

The last troubleshooting step you should consider is a factory reset. This is done to check if a software glitch is causing the problem. Make sure to backup your phone data before doing the reset.

If the above steps fails to fix the problem then I recommend that you bring your phone to a service center and have it checked as this could be caused by a damaged charging port assembly.

Problem: I downloaded a software update & plugged in the phone while it was happening. The screen is now showing some red & green writing starting with Bootloader exception Some numbers then Exception: do_handler_serror It won’t turn on/off I’ve tried the volume down & power key together for 10 seconds and it makes the writing disappear temporarily but it then returns. Help!

Solution: There have been several reported cases of this particular issue occurring on this device even if the phone has not been rooted or is not running on a custom ROM. If your phone is still running on its stock firmware then the issue is most likely caused by the OTA update that you performed while the phone was charging. A bug in the update causes this particular issue.

What you need to do in this particular case is to try to start your phone in recovery mode then do a factory reset from here. Take note that the reset will erase your phone data.

If the above steps fails to fix the problem then you should bring your phone to a service center and have it checked.

S7 Froze And Crashed After Dropping To Floor

Problem: I dropped the phone on the floor, around 10 minutes later the phone froze and crashed but turned on soon after. However it completely crashed for a second time with no screen response and the LED light has Stopped showing any light

Solution: The first thing that you need to do in this particular case is to simulate a battery pull by pressing and holding the power and volume down buttons for at least 10 seconds. Your phone should restart after this. If it still remains unresponsive then ty charging it first for at least 20 minutes then turn it on again. If it still doesn’t work then try starting your phone in recovery mode and from here you will have to do a factory reset. Take note that the reset will erase your phone data.

If the above steps fails to fix the problem then you will have to bring your phone to a service center and have it checked.

Problem: Samsung s7 freezes EVERY time the phone goes idle. Have to reset using power and volume down to use it the it goes idle and freezes again…..

Solution: Does your phone have a microSD card installed? If it does then try removing it as this could be causing the problem.

If your phone doesn’t have a microSD card or if the issue still occurs even when the microSD card is removed then continue with the troubleshooting steps listed below.

Problem: My phone froze this morning while using Facebook Messenger, so I performed a forced restart. Problem is, the blue LED remained on through the entire procedure and the phone hanged showing the Verizon logo; the animations of the logo played but the phone would not continue to boot and became hot. I then entered recovery mode, cleared the cache, and tried to boot into Safe Mode. Same problem. I then performed a factory reset, and still have the same problem. I also discovered that the phone refuses to turn off; the blue LED remains lit no matter what. The battery is fully charged.

Solution: Since a factory reset fails to fix the problem then it looks like the phone is bricked. For this case you will need to flash the phone with it updated firmware file using Odin. You can download the firmware file of your phone from the Sammobile website where you will also find the instructions on how to flash your phone.

If the above steps fails to fix your phone then you should bring it to a service center and have it checked.

Problem: My galaxy s7 phone is sprint net when i took the phone outside USA the hands free activation message keeps popping up along with a message saying that unauthorized action has been done please restart. I  ignore it and the phone works will for some days then, the smart manager stops so does the Play store and Instagram .and when I receive calls I get no name only a message saying your phone has unfortunately stopped .when I restart it will not work until I do recovery Can you please help

Solution: The best way to fix this issue is to do a factory reset from the recovery mode. Take note that the reset will erase your phone data so if there is any way to backup your phone data I suggest that you do it before doing the reset.