The #Samsung #Galaxy #S5 which was released way back in 2014 has already undergone several software updates. Initially running on Android Lollipop when it first became available this phone has now been updated to Android Marshmallow. While updating the software is easy since a notification will appear, sometimes this update is unavailable. In other instances, the phone might have some issues during or after the update. This is what we aim to address today as we tackle the Galaxy S5 does not show updates available issue & other related problems. We have gathered several issues of this nature sent to us by our readers and have addressed them below. 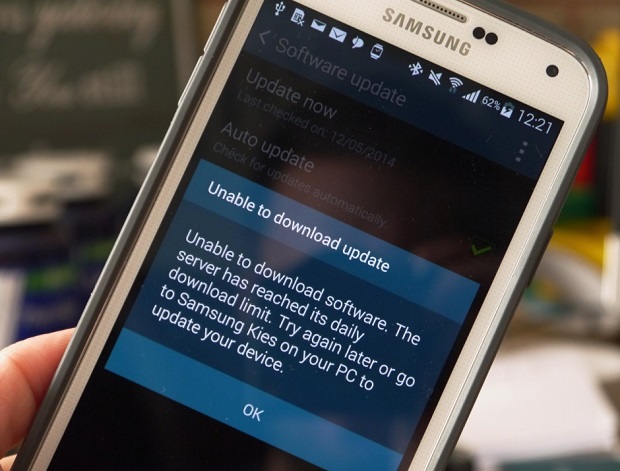 S5 Does Not Show Updates Available

Problem: I purchased my SM-G900M Galaxy 5 from Defense Mobile (ATT) 9 months ago. I recently switched to Cricket Wireless (again ATT). My phone has the original software installed 4.4.2, and does not show any updates are available. I cannot get Kies to work on either of my Vista PCs. I tried removing the battery and no updates. It still says Defense Mobile when I power it on, but Cricket afterwards. Cricket support was useless. Any help would be greatly appreciated.

Now, since your phone is now on a different carries the next best thing to do to check for the update is to use Kies. You should try using Kies preferably on a computer running on Windows 10. Once the phone is detected by Kies then you will be notified of the update.

Another step you should try is to do a factory reset before checking for the update ( either through the OTA method or by using Kies). Make sure to backup your phone data before doing the reset.

One last thing you should consider is to manually flash the updated software to your phone. Instructions on how to do this can be found at several of the popular Android forums online.

Problem: Hi, I am using Samsung Galaxy S5 (SMG900F) Recently i update from lollipop to marshmallow through official update and it was working well. Recently i got another official update indicate that for performance, from the day i did the recent update my phone is restarting always and its showing samsung galaxy S5 and again and again restarting and showing the samsung galaxy S5 until i am removing the battery. after 5 or 10 mints later if i am inserting the battery and power on the phone it will boot and we can see Samsung logo and will appear (android is starting….. optimising app 286 of 1). After this upgrading phone will work as usual. When i start using the phone regularly after sometimes the phone will be re start as same i said earlier. and i need to do again the all this things to work phone. Kindly guide me what is the issue and how can i sort out this issue.

Solution: It’s most likely that this issue is caused by a data issue in your device. Try wiping the cache partition of your phone first in recovery mode. This will delete the temporary data in your phone which could sometimes be corrupt and is causing this issue. Restart your phone then  check if the problem still occurs. If it does then I suggest you backup your phone data then do a factory reset.

Problem: When I go to check for system updates, it says “Software not updated” “failed June 4 2016 Error Code: 555”. So, it attempted to update, but failed. When I select “check for new system updates, it says my phone is up to date, but clearly it is not, as I do not have Marshmallow, and still running 5.0, and when I go into update history, it says my last update was on March 3, 2016. I attempted to use the verizon update assistant on my computer a well, and it also says there is no update. Please help. Thanks!

Solution: Your phone might be sending a signal to the Verizon update servers that it is already updated despite the fact that it failed to get the update. In this case the most likely problem is that the download got interrupted or the installation of the update was incomplete resulting in the error 555.

What you need to do in this case is to try wiping the cache partition of your phone first from the recovery mode. This will delete the phone’s temporary data which could be causing the problem. Once this is done make sure that your phone is connected to a strong and stable Wi-Fi network before checking for the update.

If the problem is still the same then you should proceed with clearing the cache and data of the download manager app. You can do this from the application manager.

If the above steps fail then you should backup your phone data then do a factory reset. Once the reset is done check for the update again.

S5 Software Update Could Not Be Installed

Problem: Anytime my phone tells me that there is an update available I go to download and install the update. I currently have over 6 GB of space on my phone. Once the phone starts the install the update it gets to 1% then stops. Then when I unlock my phone after the restart is done, a screen pops up and says “the software update could not be installed” I have lots of space on my phone and am confused to why it won’t update.

Solution: Since it’s clear that available space is not the problem then the next possible reason why this is happening is that the issue could be caused by the current phone software. What you should do is to backup your phone data then do a factory reset. Once the reset is done download the software update again and install it.

S5 Not Getting Software Update

Problem: I have a galaxy s5 Verizon  5.0 brand phone it is prepaid and I’m with straight talk and have not received the 6.0 update don’t know if I will receive it or not or if Verizon has sent out the update over the air or not please help me with this issue if you can.

One other option that you should try is to use Kies in updating your phone. Connect your phone using a USB cord to a computer with Kies running then check for the update.

If the above steps fail then try backing up your phone data then do a factory reset. Once the reset is done check for the update again using the two methods listed above.

Problem: Purchased the phone used and did the two available updates it gave. Update info claims it to be running marshmallow but under about phone in settings shows version 5.0. Have restarted phone and also tried factory reset. Same thing shows. Any idea on a way to solve this?

Solution: Since you already did a factory reset and the software is still showing as Lollipop then the phone might not have gotten the Marshmallow update. Try to manually check for the update again. If the update is not available through OTA method then try connecting your phone using a USB cord to a computer with Kies running then check for the update.

Problem: I go to update my device and it hits the reset and goes to the updating screen but instantly says update failed and it brings me back to my home screen when it once again says software update failed. Idk what update this is but it needs to be updated. I haven’t had a successful update in so long.

Solution: To successfully update your phone make sure that you have your device connected to a strong and stable Wi-Fi network. You should also have sufficient internal storage space available. ( if possible have at least 7GB of space free). Another factor that can prevent your phone from updating is your current phone software. If this is the case you should backup your phone’s data then do a factory reset. Once the reset is complete you should check for the update and install it.