While your Samsung Galaxy S7 is a powerful device, there are times when apps, services or the firmware itself crash. As a result, the device may become unresponsive with its screen frozen or black. Normal crashes can easily be fixed and you can bring the phone back to life by doing some basic troubleshooting, however, there are cases wherein the problem is really serious you have to do some complicated procedures just to have a chance to fix the issue. 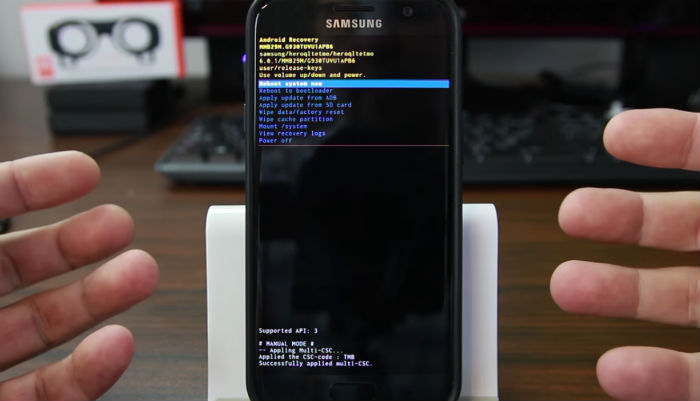 In this post, I will tackle the issue involving the Samsung Galaxy S7 whose screen reportedly became black and unresponsive shortly after it was updated. It isn’t clear if the problem is caused by the firmware that’s it’s necessary we troubleshoot. The second problem is about the black screen of death (BSoD) which may happen to anyone. So, continue reading below to understand more about these issues and to learn what you should do if they occur.

But before we jump right into our troubleshooting, if you have other issues with your device, make sure you drop by our troubleshooting page for we have already addressed a lot of problems reported by our readers before. Find ones that are similar with yours and use the solutions and troubleshooting guides we suggested. If they don’t work for you, then fill up our Android issues questionnaire and hit submit to contact us.

Problem: I have recently received a notification for an update. I have a Galaxy S7 phone. So, I downloaded the update as instructed and I’m not quite sure of the update was successful or not but I was actually able to use to phone after the update, so I guess I’ve updated it successfully. After a day or two of using my phone after the new OS was installed, I noticed it seemed to have slowed down a bit. Well, it would take longer for apps to open even if those apps used to open really quick before. And then another thing happened–the phone turned off and won’t turn back on. The screen is black and the phone won’t turn on no matter what. Is there something you guys can do to bring my phone back to life? Thanks.

Troubleshooting: The fact that you were able to use your phone for a short time after the update is good enough to assume the update was successful and the problem might have been caused by other factors and not by the firmware. However, it is imperative that you do the basic troubleshooting to know what the problem is all about. That being said, here’s what I suggest you do…

Assuming the problem was due to a glitch and the phone still has enough battery left, it should reboot normally. Should the phone fail to boot up, try doing the same procedure just to make sure you did it right. After several attempts and the phone remains unresponsive, then we must assume the problem is more than just a glitch.

Before moving on to other troubleshooting procedures, rule out the possibility that the problem occurred due to drained battery. Naturally, the phone powers down when its battery is all drained and it may refuse to boot up. So, let’s try to first charge the phone to see if it does.

Aside from the fact that you’re trying to charge the device, plugging in the charger and connecting it to your device will immediately give you an idea how serious the problem can be. If the phone shows up the usual charging icon and lights up the LED indicator at the top of the screen, then its hardware as well as its battery is just doing ok. However, if none of those things show, it could mean there’s a problem with the hardware, although I would suggest you try using another charger just to make sure it’s not a charger issue.

Assuming the phone charges, leave it charging for at least 10 minutes before attempting to turn it on again. If it still won’t respond, then move on to the next steps.

On the other hand, if the phone won’t charge, then at this point, it’s safe to just send the phone in for checkup and repair.

Step 3: Try booting it up in Safe mode

Do this procedure if the phone was charging fine and you’ve left it plugged in for several minutes. It’s useless to continue our troubleshooting if, in the first place, we can’t be sure if the phone still has enough battery to power up its components. So, if it charged properly, try to follow these steps as some third-party apps may have caused the firmware to crash and prevented the phone from booting up:

If the phone still won’t boot up in this mode, then try the next step.

Step 4: Try booting it up in Recovery mode

Again, you must do this only if the phone charged properly or if it failed to boot up in safe mode. What it does is power all hardware components but doesn’t load the Android interface. Instead, you will be brought to the Android system recovery screen wherein you can wipe the cache partition or do the master reset but you don’t have to do any of them because if only you can bring the device to boot in this mode, it’s a sign the problem is not with the hardware, otherwise, you have to let the technician handle the problem for you.

Here’s how you boot your phone in recovery mode…

If none of these procedures work, then send the phone in for repair.

Problem: I have owned my Samsung S7 for 11 months. It has had the black screen of death 3 times. Once not too long after purchase. I took it back to the service supplier and they fixed it.  I asked what was wrong and they said this happens sometimes. It happened again about 10 months in and I plug back in pushed random buttons and it worked the next day But the day after I got the black screen again. I took it to the service supplier(different town) and they told me about the volume, home and power buttons and that fixed it immediately. Since the phone is still within warranty I contacted Samsung and they have given me forms to send for repair. The issue is I will be without a phone for at least 2 months. My question is is it worth sending away? Has this issues been “fixed” or should I just keep it and continue with the volume down home power fix. I think I have the version correct it states 6.0.1 but I don’t see Marshmallow.

Solution: Well, if your phone still on it’s warranty period, then it might be better for you to send it and let them fix the device. But as you stated that the issue was fixed after pressing those random buttons on your phone, then there is a possibility that it is just a firmware problem. In fact, when the device cannot boot up completely, there are several factors to consider why it is happening; it could be the hardware has a problem or the firmware is just crashing. So, if you’re not sure what really caused the issue, the best thing that you can do is to do the software troubleshooting first. Here are the methods that you should do:

Step 1: Check the battery for it might be defective

If the device won’t power on there is a possibility that the battery is defective and that may be the reason your phone cannot boot up completely. So, to verify if the battery is defective or not you can charge the device for -20 minutes and observe closely if the LED above the screen is lighting up. If so, then the battery is fine and maybe it is a firmware itself caused it. However, if your phone is not responding even if it’s connected to the charger for several minutes, then it might be a hardware problem and you can send your phone right away on Samsung for repair.

Remember, you can perform this procedure on your phone if it is responding or charging normally while it is connected to the charger. The purpose of this method is to refresh its memory as well as eliminating those apps running in the background that you are not using that might preventing the device to boot up. To do this, just press and hold the Volume Down and Power keys together and wait for 10-15 seconds until it boots up. But if the issue still happening after the procedure, then you can perform the next method.

One way of fixing this type of issue is to find out if there’s a downloaded or built-in app triggered it. But take note that this procedure is just an android environment wherein all third-party apps will be disabled temporarily and only the pre-installed will be running in the system of the phone. So, if it boots up normally, then obviously one of your downloaded applications is the culprit and you should uninstall it to prevent the issue to occur again. Here are the steps that you need to follow to boot in safe mode:

Step 4: Clear the cache partition for it may be corrupted

Since, we are not sure what really caused the issue to occur it is imperative that deleting the system caches on your phone should be done especially if update was recently installed. The reason for doing this is to eliminate all old caches in the system so that the device can create newer caches that is compatible in the system. So, here’s how to do:

If you have successfully wiped the cache partition but the phone still won’t boot up normally, then you may follow the next step. However, if the screen remained black and won’t respond, then you have no other choice but to send the phone for repair.

If all procedures fail to fix the problem on your device, you don’t have a choice but to perform a more complicated method by resetting it. Through resetting the system, all files and data stored on your phone will be deleted as well as bringing back the operating system to it’s default settings. So, before you proceed to this method make sure to create a backup by transferring all of it to your SD card or personal computer.