The display is where you can find almost all the wonderful things your phone can offer but what if one day the screen just stays blank, flickers without apparent reason or presents you with a rainbow screen of death? 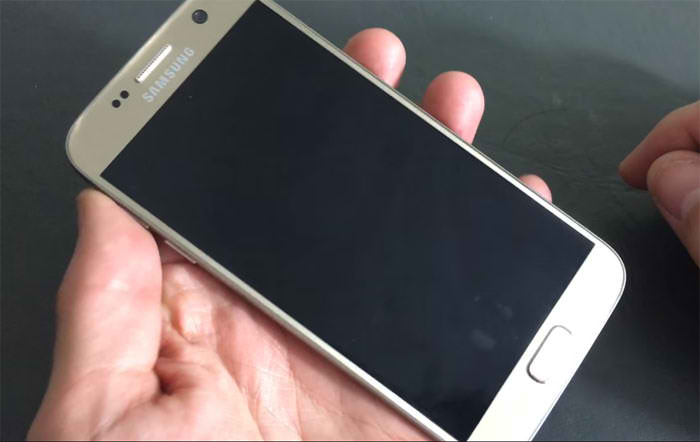 I will tackle these issues in this post as they’re among the common problems we received from our readers who own the Samsung Galaxy S7 smartphone. So, there are three sections here. You may read the entire article or go straight to the problem that’s similar to yours. Just click on the link below to jump to a specific issue.

But before we proceed with our troubleshooting, if you have other concerns with your phone, make sure you drop by our Galaxy S7 troubleshooting page for we have already addressed hundreds of problems with this phone. Find issues that are similar with yours and use the solutions or troubleshooting guides we suggested. If you need further assistance, you can always contact us by completing our Android issues questionnaire.

Problem: My phone is a Galaxy S7 that I bought in May, brand new. To be honest, I love the phone and took great care of it since I upgraded from an S3, so there’s a huge gap between these devices performance-wise. The thing is, one day the screen just turned blank and no matter what I do, it remains blank. So, I cannot use the phone but I think the device is actually still powered on as it rings whenever text messages come in. there was even a time when a call came in and it rang. Can you help?

Troubleshooting: Blank screen can be fixed by a very simple procedure or a complex one depending on what really is happening inside your phone and we won’t know that unless we thoroughly troubleshoot it. With that being said, here’s what you need to do…

When the firmware crashes, the same thing could happen–the screen goes blank and the phone as a whole is unresponsive. Previously, we could just pop the back cover open and remove the battery but with the Galaxy S7, we can no longer do that as it has a non user-replaceable battery. Samsung engineers however, already thought of that. So, the phone can actually do the virtual battery disconnect through Force Reboot and this is how you do it: press and hold the Volume Down button and the Power key together for 10 to 15 seconds. The handset should reboot but if not, the next step might help.

Step 2: Attempt to restart the phone in Safe Mode

There are times wherein third-party apps or any apps for that matter crash and leave the device frozen and unresponsive with a blank screen. Normal reboots may not be able to fix the issue that’s why you need your phone to boot in diagnostic state or Safe Mode wherein all third-party apps are temporarily disabled.

If our suspicion is correct, then your Galaxy S7 will boot up successfully into safe mode and once in that state, find the app that may be causing the problem and uninstall it. Here’s how you restart your phone in safe mode.

Step 3: Attempt to boot up your phone in Recovery Mode

Doing this procedure will power up all the hardware components in your device but the Android interface won’t be loaded. Needless to say, your phone will run bare. So, if the problem is with the firmware, there’s a chance your device can boot up in recovery mode. The very purpose of this procedure is to know if the phone can actually still boot up and to find out if the display works the way it should because if not, then you need to have the device checked by a technician.

Step 4: Request assistance from your provider or Samsung

If your Galaxy S7 cannot boot up in safe and recovery modes, then it must be a serious issue with either the firmware or the hardware. At this point, there’s nothing much you can do anymore but seek assistance from your service provider, Samsung or technician.

Bring the phone to the store, send it to Samsung or bring it to a local shop to have it checked. It’s all up to you which one to choose depending on your convenience.

Problem: While all other features of my Galaxy S7 are working properly, the screen randomly flickers and I haven’t noticed a pattern. When it happens, the phone still functions normally and the flicker actually happens about a second or two then the screen returns to normal until it flickers again. I don’t know what caused this but I think it started after an update, at least, that’s what I think. Do you have any idea why this is happening? Can I fix it on my own? Thanks.

Troubleshooting: When the screen flickers, it’s more likely caused by bad connection but since the Galaxy S7’s components are properly glued inside, there’s almost no chance the flex cable would come off. So, this issue might be caused by the firmware, the hardware or water and /or physical damage. Let’s try to rule out these possibility one by one…

Step 1: Check for dents and scratches

They’re a sign that the phone sustained physical damage. If the force somehow affected the phone’s screen, then such force should leave a dent or just a scratch. In this case, you should visit a tech immediately and have it figured out because maybe, something got loose inside.

Pop the SIM card tray all the way out and look into the slot. You should see a sticker in there, a small one. If it’s white, then your phone is not water-damaged, otherwise, the sticker would appear to be red, pink or purple. Remember, liquid damage isn’t covered by warranty but if this is the case, it must be just a minor damage as the phone can still power on.

This procedure will bring the phone back to its default settings. It is necessary to rule out the possibility that it’s just a firmware issue especially that you said the problem may have occurred after a firmware update. But before the reset though, make sure you backup your files and data as they will all be deleted.

Step 4: Send the phone in for repair

After those steps and the problem still persists, then you need help from a technician. Send the phone in for checkup and/or repair because as far as troubleshooting is concerned, you’ve already done everything there is to be done.

How to troubleshoot Galaxy S7 that has a rainbow screen

Problem: I have a Samsung Galaxy S7 and just recently I have noticed when I plug it in to charge I get a rainbow screen that wont shut off unless I press the power button.  It also lights up with the rainbow screen on it’s own occasionally while it’s plugged in charging as well.
The screen saver is not a rainbow so I know that is not the issue.  This issue just started after having the phone for almost 4 months.  Also, today the phone just shut off on it’s own and I could not get it to restart. Thought the battery was dead so I plugged it in, it was completely unresponsive.  Black screen nothing.  I did the reboot you mentioned on here by holding the power button and the volume down and finally it restarted, reluctantly though it seemed.  Don’t know if the rainbow thing had anything to do with this.  Any advice you can offer would be great.  Thank you.

Troubleshooting: Samsung Galaxy S7 is known to be the best android in the market today. With its various features namely; physical appearance, superb camera, easy hold and handle, unbelievable processing power, IP68 protection and internal memory of 32/64 GB, 4 GB RAM. What can you ask for from an android phone? Most amazing features are all in S7. Apparently, even how beautiful and perfect it may seem, still there are glitches and problems occurring. And one of the problems that will be given answer through troubleshooting is rainbow screen of death.
The most common reasons why rainbow screen happens on your phone are; software update and daydream.

Software update is an update of the current operating system that you have. But since update is needed on a device, here’s how you can solve rainbow screen issue that is caused by a software update. You can do a factory reset but you need to make sure that doing such move, please remember to keep a backup of your important files.

Reset the device from the settings menu.

Daydream feature is an “interactive screensaver mode” that can activate automatically when your device is docked or charging, keeping your screen on and displaying information.  So, it is better to turn off daydream on your device.