In this post, I will address one message sent by a #SamsungGalaxyS6Edge owner who’ve experienced issues while updating his previous #smartphones. Anyone who has encountered problems with their #Android phones in past will, probably, ask the same question. 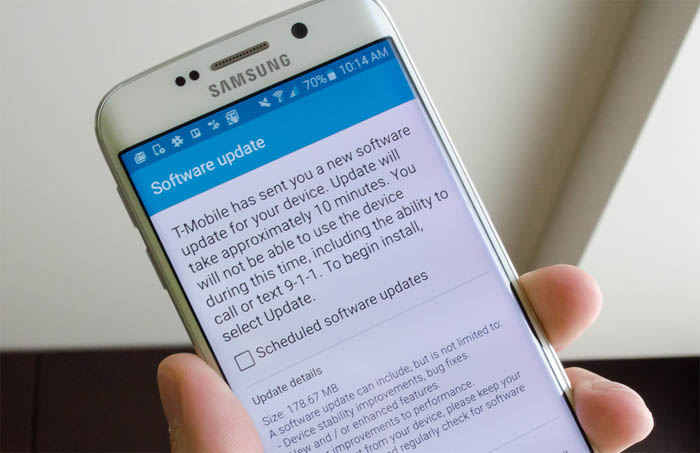 “T-Mobile is bugging me to upgrade to Android 5.1. I’ve been burned by Android upgrade on my previous Samsung phones. Do you have any information to indicate that this upgrade will cause problems?” — Larry

That’s one question that needs to be answered once and for all. It applies to all Android devices, but in this case, it’s a Galaxy S6 Edge owner who asked it first.

As for me, I’ll just wait for someone to download and install it and if he/she complains, then most probably you will encounter the same issues. However, it’s always different for everyone; you may encounter issues but not the same as ones encountered by other users. In other words, you can never predict what would happen to your phone during or after the update. The good thing is, if problems occur, there are always ways around them and that’s what I will tackle in this post as an answer to our reader’s question.

Before we go any further, if you have other concerns with your phone, visit our Samsung Galaxy S6 Edge troubleshooting page as it contains solutions to the most common problems we already addressed. Find issues related or the same as yours and try the solutions we provided and if they won’t work, feel free to contact us. But remember, the more information you provide, the more accurate our solutions will be.

Problems During / After a Firmware Update

I will tackle the most common problems only so there’s always a chance that the issue you might have isn’t included in this short list.

“Do you have any information to indicate that this upgrade will cause problems?”

No, unless there’s a pre-existing bug in the firmware that your carrier or Samsung already acknowledged.

Now that I have answered the question, let’s proceed to the list of problems you may encounter during and after an update.

It will happen if the download and/or installation is interrupted. As a result, the phone may return an error indicating the update wasn’t complete.

The most common cause of interrupted download is unstable internet connection and more often than not, if this happens, the installation will fail, too. Or worse, your device will be soft-bricked.

For interrupted or failed update, you just have to try again especially if your previous updates were successful. It is recommended that after getting the prompt that the update failed, you have to reboot your phone and re-attempt to download.

Other options you have are to use Samsung Kies, manually install the firmware using ODIN or bring the phone immediately to your carrier or service provider to be checked.

If for some reason, your phone couldn’t complete the update, you need to check your internet connectivity first. Make sure you have an active connection by browsing a few websites or downloading small apps. Unstable internet may often result to this.

Another thing is to check the amount of space left in your phone’s internal storage. Remember, for over-the-air updates, the entire package will be downloaded to your phone’s storage first before installation. So, basically, before the new firmware is installed, there are two firmware packages in your phone’s memory. Hence, make sure there’s 1.5GB of space left before attempting to update your phone.

For this problem, you may also use Samsung Kies to update your phone if OTA failed a few times.

Got Stuck in Boot Loop After an Update

Corrupt files and caches are often the cause of this problem. While many users tend to panic immediately once their phones refused to boot up successfully, it’s actually very easy to fix–wipe the cache partition.

Got Stuck in Samsung Logo after an Update

Reboot. That’s the first thing you should do if your phone cannot get past the Samsung logo immediately after an update. If it’s still stuck on the same screen after a reboot, then attempt to boot it up in safe mode to see if it can boot up successfully when all third-party apps are disabled.

If the safe mode remedy failed, then boot your phone in recovery and wipe the cache partition; just follow the instructions in the previous problem.

Apps Disappeared after an Update

Applications need to be optimized after an update. The first boot up is for firmware optimization and if your apps won’t appear, reboot your phone.

You may need to reboot your phone 3 or 4 times to get every single app you previously installed work again. So far, there’s no other solution to this problem as there were very few reports that the phone was reset during an update. Basically, if the apps weren’t uninstalled from your phone, they’re still there and a few reboots will bring them back.

Phone is Sluggish After an Update

Reboot a few times to optimize the apps. If the problem remained after doing so, then try booting the phone in safe mode first to evaluate if then it runs slow even when all downloaded apps are disabled.

If the sluggishness didn’t go away even in safe mode, try to backup your important data and perform a master reset to give your phone a fresh start.

Device Keeps Rebooting After the Update

First of all, attempt to boot the phone in safe mode to see if it still reboots there. If so, then it’s confirmed the update was bad or some of the data became corrupt. So, backup your important files and data and perform master reset; follow the instructions in the previous problem.

After the reset and the phone still reboots, it means the firmware is bad or some of the data are missing. In this case, it needs to be reinstalled. You may manually flash the firmware yourself (which, by the way, will void your warranty) or you can bring the phone to your provider and let its tech reinstall the firmware for you.

For those who are willing to take the risks, just download ODIN and the firmware you want to install on your phone. Install ODIN to your computer, connect your phone and begin the flashing. It often works.

Some Apps Crash After an Update

It might be a compatibility issue. Open Google Play Store, go to My Apps and see if there are available updates for those apps. If there are, then update them. Or, you can just clear their caches and data and then uninstall them. After that, download fresh copies of those apps from the Play Store. That usually works.

If, however, only a few Google apps crash after the update, then all you need to do is uninstall updates from the Play Store.

You may also do the same for Google Play Services should the problem remained after the uninstalling updates from the Play Store.

Lastly, if you haven’t rebooted your phone after the update yet, then you really must do it a few times. Those apps that crash may just need to be optimized.

I hope this post can help you one way or the other. Thanks for reading and I wish you all the best.