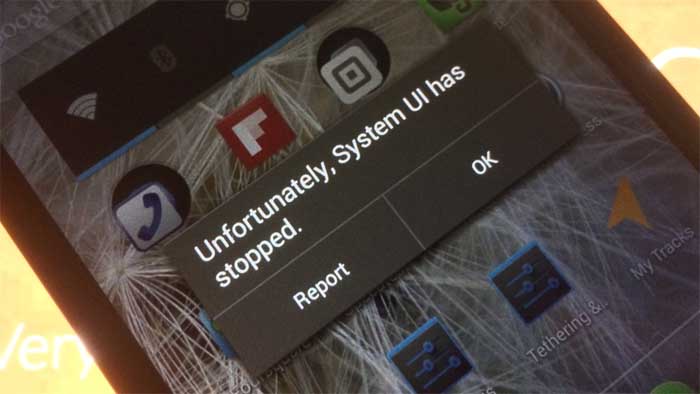 We received a few complaints from Samsung Galaxy S7 owners regarding the error message “Unfortunately, System UI has stopped.” The System UI is actually an Android service that handles the front-end of the system including launchers, home screens, wallpapers, themes and skins. In Samsung Galaxy S7’s case, the main interface is the Touchwiz, although it doesn’t necessarily mean that when this error pops up, the problem is with Touchwiz.

Continue reading to learn more about this error message as well as its variation “Unfortunately, the process android.system.ui has stopped.” I will guide you on how to thoroughly troubleshoot this problem and I will give you the step-by-step instructions to fix it.

Now that I’ve explained the possible causes of the error “Unfortunately, System UI has stopped,” it’s time we jump into our troubleshooting depending on the situation.

However, before jumping into our troubleshooting, if you have other concerns, visit our S7 troubleshooting page and browse for similar issues. We already addressed a lot of problems with this phone since it was released. Find ones that are similar to yours and use the solutions we suggested. If you need further assistance, then don’t hesitant to contact us by completing this form.

Below are some of the situations that this error maybe triggered. Read on to know how to troubleshoot this problem should you encounter it. I also included few of the complaints we received from our readers that is related to this issue.

As to the physical damage, it’s obvious if your phone suffered from it because you’d see some scratches and/or cracks on the outside. Any physical force that would cause the inside component to function abnormally should leave a trace outside. So, the first thing you should find is the scratches and cracks.

Your Galaxy S7 also has a Liquid Damage Indicator that will tell you if it got in contact with liquid. Your phone is water-resistant, not waterproof so there’s a big chance water can get into it messed up the electronic components inside.

Remove the SIM card tray, look inside the slot and find the small sticker. If it turned red, pink or purple, then the device suffered from liquid damage. But if it stayed white, then water hasn’t found its way into the phone yet.

If your device started to act abnormally or if the error shows up after it suffered physical and/or liquid damage, then turn off your phone and don’t do anything. Instead, send the phone in for repair immediately. We cannot tell for sure the extent of the liquid damage.

Step 2: If the error came up after a firmware update, then delete the system cache

This procedure is very effective to this error message because if it so happened that it started to pop up after an update–regardless whether it’s a small or a big one–it is almost certain the system cache got corrupted preventing core services and some pre-installed apps from running smoothly.

At some point, you may have also noticed that the phone started to slow down, random reboots, or freezes from time to time. In other words, if the error “System UI has stopped” comes up, it means the phone is currently undergoing a general performance problem. So, here’s what you need to do:

As long as problem is minor, deleting the system cache will fix it, otherwise, you are left with no other choice but to do the next step.

Step 3: If the error is accompanied by some serious firmware issues, then a master reset is necessary.

If deleting the system cache didn’t fix the problem or if aside from the error message there are other issues that affects the general performance of the phone, then they’re signs that you phone needs to be reset to work properly.

Before the reset though, make sure you make a backup of your data and files saved in the phone’s internal storage as they’ll be deleted during the process. After doing all that, follow these steps:

Step 4: If all else fails, the firmware has to be reflashed or find a technician to do it for you.

This is the worst case scenario and if you can reach this point, it means that the “System UI has stopped” error isn’t just because of a minor firmware issue. The new firmware may need to be reflashed to your phone or reinstalled to make it stable.

Fortunately, manually flashing a firmware on any Galaxy device has been made easy using the Odin flashing tool. But the thing is, if you haven’t done it before, it’s most likely you don’t understand how it works. In this case, just try to find a technician that will do it for you as the process is also risky. You might end up soft-bricking your phone.

Problems From Our Readers

Below are some of the complaints we received from our readers that’s related to this issue. Read on to learn how the error occurred to them and what needs to be done to fix it.

Q: “There was an update that my carrier rolled out recently for the Galaxy S7. It was a small update and got downloaded easily on my phone. But however small an update is if it’s faulty, then it will surely a lot of issues and that’s what happened to me. After the update, the error message ‘Unfortunately, System UI has stopped’ started to show up and the phone’s performance got worse. What can I do?”

A: You need to follow the entire troubleshooting procedure above to verify further what the cause is and how to fix it.

Q: “I tried to use a third-party launcher and actually it works really good. I hate the Touchwiz that came with the phone but the thing is, there’s an error that keeps popping up. It’s saying about the System UI that stopped working. Have you guys encountered this issue before? By the way, I have a Galaxy S7 and it’s new so I’m a bit frustrated with it over this error. Help me guys, please.”

A: I don’t know what kind of launcher you installed but it’s causing conflicts within the firmware. To verify further, try to boot your phone in safe mode and you’ll find out the error won’t pop up:

It proves that the third-party launcher is the one triggering it. Try wiping its cache and data first, then boot in normal mode to see if the error will show up, if so, then you have no other option but to uninstall it.