Remember the old solitaire card game on some of the older versions of Windows? It was a fun and quick game to play if you needed to burn a couple of minutes or time or make the day go by a little quicker as you worked. You can still get it on Windows, but now, many of us are using smartphones and tablets. A quick game like solitaire isn’t installed on the phone or tablet by default, so you’ll need to go to the Google Play Store and download the best solitaire app for android yourself.

However, solitaire games come in all different options now. Some have improved graphics, others have extra features, some are more fast paced, and so on. That said, it can be difficult to pick just one to stick with and have fun with. If you follow our guide, we’ll show you our five favorite solitaire games on Android. Want to add some adventure and quest completion to your solitaire fun? Then you might want to consider using Solitairica. In Solitairica, you battle the great Emperor Stuck, retrieving all of the hearts that he stole. With the guide of the great Kismet, he will teach you the powers of solitaire, and use four of the great energies — attack, defense, agility, and willpower — to fight the great Emperor Stuck. You can check out this fun twist on solitaire at the link below! Solitaire: Frozen Dream Forest is pretty close to the original game, adding in some fun extra graphics. The purpose of the game is rescue the animals from the Frozen Dream Forest, and shuffle the sun back. There’s tons of challenges in this game that will keep you busy for a couple of hours, if you have the time to spare! The one complaint is that this game is riddled with advertisements, which can make it a little more difficult to play. But, if you can get past that, it really is a fun game that could keep you busy for hours at a time. 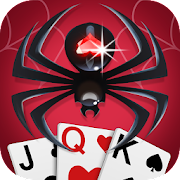 Spider Solitaire really gets back to the roots of the game. You play traditional solitaire on a green board; however, there is beautiful 3D women planted on the background for some eye candy during the game. There are some other unique elements to it, and the developer outlines them like this (it’s nothing game-altering):

You can check the game out for yourself below. The game is completely free to play, but there are ads to keep the game well supported.

This Hidden Solitaire is a ton of fun. There are no Story Modes or Adventure Modes like you might find in Solitairica or Hearwild Solitaire, but there’s still a semi-unique spin on it. There are a whole 70 levels that you have to wade through, and they get more difficult the further you get. The game is really neat because in addition to that unique twist, there are tons of beautiful card styles and artwork all throughout the game. The game is completely free to play, but it does make its money through advertisements. That means that if you want best solitaire app for Android ad-free game, you’ll have to pay the $2 in-app purchase to remove them and have a cleaner experience.

Next up on our list is Heartwild Solitaire. This is another solitaire game, but it comes with a unique twist. The game has a Story Mode, that will take you through the adventures of Anne, who is on a quest to find out who she really is. There are 96 unique layouts, and you’ll basically play your standard solitaire game as you progress through this story mode — match cards, make pairs and reach to the end of the game!

Verdict on The Best Solitaire App for Android

So, what solitaire game should you download for yourself? it all depends on what your taste is like — if you want a unique spin on solitaire, what Solitairica and Heartwild Solitaire has to offer is unmatched. But, if you would like to the more traditional route of the card game, you cannot go wrong with Spider Solitaire, Hidden Solitaire or Solitaire: Frozen Dream Forest. Although no matter which solitaire game you decide to play, you’ll still be playing the tried and true card game!