The importance of firewalls for home and business cybersecurity doesn’t need to be stressed. With around 400,000 new malicious programs being released every day, those who leave their network ports open and unguarded risk losing their data and potentially even becoming victims of extortion or blackmail.

The chances are that you’re familiar with software firewalls. A software firewall is a program that runs on a computer or server, monitoring and controlling the incoming and outgoing network traffic based on predetermined security rules. With this type of a firewall, malicious programs are stopped only when they enter your local network and knock on the digital doors of your computer. What’s more, software firewalls are effective only when properly configured, which isn’t something most regular users can do.

Cujo is a modern-looking hardware firewall that can either plug directly to your router or act as a bridge between your modem and your router. Once connected, it monitors inbound and outbound network data. Cujo can instantly detect and stop incoming cyber threats and prevent sensitive data from leaving your home network thanks to the integrated business-level malware detection system.

The detection system relies on a huge database of known cyber threats. The database is frequently updated, and every Cujo that encounters a new cyber threat sends information about the risk to a central database from which it propagates to all other Cujos. As such, Cujos essentially form a global cyber defense network, working together to spot unknown threats and alert others about them.

Besides its cyber defense capabilities, Cujo has an integrated parental control feature, which can limit access to inappropriate sites and apps. The device boasts a 1 Gbit Ethernet connection, which means that it won’t slow down even the fastest network connections out there. Because Cojo connects directly to your router or modem, it protects all devices on your home network at once.

Cojo can be controlled using the company’s iOS and Android app. With the app, you can view what devices are connected to your home network, monitor all the activity that takes place on the network, change settings, and even apply system updates.

Cojo offers three plans, each with a different subscription model. The most affordable plan has upfront and monthly costs. A tier above it ditches the monthly subscription fee in favor of a yearly subscription fee saving you a percentage of the total cost of ownership. Finally, there’s the pricier plan, which comes with a free subscription. If you would like to use Cojo for at least 2 years, the most expensive plan offers by far the best value in the long run.

This pebble-like device is actually a highly capable hardware firewall with integrated privacy features and intelligent learning capabilities. Dojo connects to your router via an Ethernet cable, acting as a guardian and protecting you against outside cyber threats.

Instead of analyzing the actual data that flows through your network, Dojo focuses on metadata instead. Metadata is data information that provides information about other data or data about data. When you take a picture using your smartphone, its metadata will describe when it was taken, what settings were used to take it, what’s its resolution, and many other things. Looking at metadata allows Dojo to quickly categorize and analyze immense quantities of data and spot malicious activity on the network without causing any network slowdowns.

All gathered information is sent to Dojo Cloud, an intelligent cloud-based cybersecurity engine that continually collects and analyzes metadata generated by all deployed Dojo devices. When one Dojo stops an attack in one part of the world, it informs other Dojos around the world about the attack through Dojo Cloud, preventing the same attack from being carried out in other homes and offices.

Dojo can be configured via the Dojo smartphone app, which has an intuitive user interface and is available for iOS and Android. Besides monitoring and configuration, the app also provides users with alerts if a security incident is identified as well as options on what action they can take if required.

Dojo price includes a year of service. Additional service costs a yearly or monthly fee. Dojo has been tested with multiple routers from Netgear, Linksys, TP-Link, D-Link, Belkin, Arris, Asus, Cisco, Ubiquity, and many other major manufacturers. For more information about its compatibility with home routers, visit the official website. 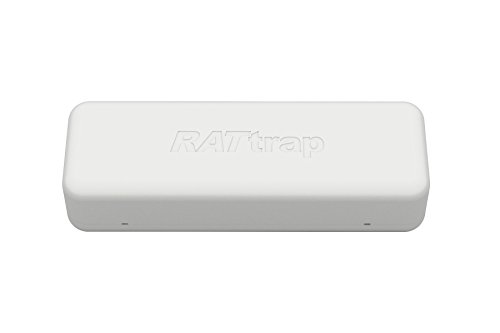 RATtrap is an inconspicuous hardware firewall designed to sit between your modem and router. With only two Ethernet sockets, two LEDs, a power input, and a small reset button, its design is as minimalistic as it gets. However, despite its modest appearance, inside is a powerful 32-bit ARM Cortex A8-based processor running at 1 GHz, 512 MB of RAM, and 4 GB of flash storage. The two Ethernet ports support speeds up to 1 Gbps, so there’s no need to sacrifice your Internet speed for better security.

Setting up a RATtrap takes just a few seconds and doesn’t involve anything besides connecting two Ethernet cables, one to your modem, and the other one to your router. RATtrap then learns the device type on each side and configures itself accordingly. Indeed, one of RATrap’s most significant selling points is the fact that it requires no configuration at all. Even updates are handled entirely automatically.

After its adequately connected, a RATtrap monitors traffic entering and leaving your home, making real-time decisions through the examinations of traffic headers and metadata. When any RATtrap device detects a previously unknown attack outbreak, it instantaneously notifies the RATtrap cloud, as described on the official website. Other RATtraps are quickly informed about the threat.

Best of all, you don’t have to pay a monthly or yearly subscription fee for RATtrap to work. The cost of the device is the only cost associated with using it.