Our smartphones, in combination with augmented reality, and the best astronomy app android, offer a fantastic way how to explore the sky and discover many wonders of the universe. Most astronomy and stargazing applications work on a similar principle. They determine your location using the GPS sensor and electronic compass in your device, allowing you to simply point the Android smartphone or tablet in any direction and see things that would otherwise become visible only with highly expensive, professional equipment.

Best Astronomy Stargazing App for Android to Explore the Sky Some of you may know Sky Map as Google Sky Map, which was the original name of this Android implementation of Google Sky, an online sky and outer space viewer. The first version of the application was released on January 20, 2012, and released under the Apache 2.0 open source license.

The team behind the application wanted to make it easy for users to learn about the night sky. Sky Map is available for free in the Google Play store and doesn’t come with any in-app purchases. It was already downloaded by well over 10,000,000 people, who gave it the average rating of 4.5 stars.

The first thing you need to do after you install the app is calibrate the compass in your phone. Just follow the 3-step instructions displayed on the screen and you will be good-to-go in just a few seconds. After that, you can simply point your device anywhere you want to see what’s in the sky. Using the icons on the left, you can filter various types of celestial bodies to easily discover what you are looking for. You can also search for a particular planet or star, which will result in a large arrow popping up on the screen, navigating you toward the object.

A good news for owners of older smartphones and tablets that don’t come with a built-in compass is the fact that you can switch into manual mode and navigate by swiping your fingers across the screen. It may not be as convenient as the augmented reality mode, but it works, and that’s all that matters. The National Aeronautics and Space Administration (NASA) is well-known for their ongoing effort to help the public learn about the universe. Their Android application is jam-packed with the latest images, videos, mission information, news, feature stories, tweets, and even a convenient access to NASA TV.

The application uses a simple layout that consists of 9 tiles placed in a grid on the main screen of the application. Each tile represents a certain category of content, making it very easy to navigate to what interest’s you the most. When you find something that particularly catches your attention, you can share it with friends on social media with just a tap of a button or save it using the favorites feature. NASA knows that images of deep space make for wonderful backgrounds, so they allowed users to save them on their mobile devices.

If you keep an eye on all the latest space-related discoveries, you will be pleased to know that the app provides the latest launch information and countdown clocks. There is also a constantly updated list of upcoming ISS sighting opportunities, which is particularly handy if you pair NASA App with an augmented reality stargazing app, such as Sky Map or Star Chart, which is the next application on our list. 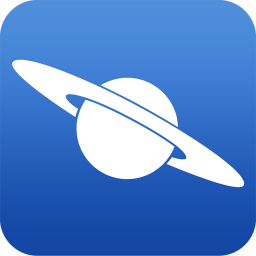 Star Chart is an augmented reality stargazing app for Android that provides a window into the universe. Just like Sky Map, it uses the device’s compass and GPS to pinpoint where the user is, and then shows the night sky as if the user was looking at it through a telescope. The application is now used by over 20 million people across the world – and for a good reason.

Compared to Sky Map, Star Chart offers basically the same experience but improves it in several key aspects. For starters, the compass calibration process is now completely seamless, sparing you the tedious process of repeatedly tilting your smartphone or tablet in different directions until you get it right. The augmentation itself is much smoother, and you really feel like the app fluidly responds to your every move as you look at the sky. Last but not least, the map of the night sky has been given a pretty noticeable visual overhaul. Constellations have beautiful pictures laid over them, so you really understand why early astronomers named them the way they did.

One very cool new feature is the ability to use voice control to explore the solar system just by saying commands like “Fly me to the Moon” or “Look at Andromeda”. These major celestial objects are then rendered in 3D, allowing you to explore them up close. Finally, you can shift up to 10,000 years forward or backward in time using the Time Shift feature.

The only thing you need to keep in mind is that the app comes with in-app purchases. They include the ability to track comets, meteor showers, satellites, and also the option to explore the extended solar system. Stellarium Mobile Sky Map is unique among all other applications on this list, because its history dates back all the way to 2001, when Fabien Chéreau, a French programmer, launched the PC version. The application has since then been ported to Linux, Windows, Mac OS X, and, recently, also to mobile devices running Symbian, Maemo, Android, and iOS.

The application is described as a fully-featured planetarium for smartphones, and it’s easy to see why, when you consider that to boasts an astonishing catalog of over 600,000 stars displayed as a real time zoomable sky map. Some nebulae and galaxies even come with high-definition pictures. Major solar system planets and moons are rendered in 3D.

While Stellarium Mobile Sky Map doesn’t come with any in-app purchases, it’s not available for free. The application costs $2.49, which could deter some people from trying it out. We, however, believe that it’s worth the cost, and you can always just wait until it will be put on sale to get it for a fraction of the price.

With the four applications presented in this article, astronomy has never been so accessible. You can use them to introduce this fascinating natural science to children or as a way how to relax and learn something interesting at the same time. There may be other astronomy and stargazing apps for Android, but our best astronomy app android selection covers just about anything you might possibly want from them.