Phones with QWERTY keyboards haven’t been super popular in years. These types of phones were more popular when the original Palm Pilots were around, as well as when BlackBerry was in its prime. Today, however, you don’t see them much anymore, except for maybe a few small cases.

However, they’re still being made quite often, though in more niche setups. BlackBerry is still making them via the manufacturer TCL, and Samsung and other brands still make them as well, just with little to no advertising. And that’s why we constructed this list — to show you nine of our favorite Android smartphones with physical QWERTY keyboards available today. Let’s dive right in.

After TCL bought out BlackBerry, fans didn’t know where the company’s line of physical QWERTY keyboard phones would go; however, they’ve done nothing but flourish. The BlackBerry Key2 is the latest release there, offering keys that are roughly 20% larger than what was seen on the original BlackBerry PRIV and even the BlackBerry KEYone. That makes it just so much easier to type and converse with on this phone.

The phone does have a more square-looking display, but it still looks quite nice. The hardware is pretty impressive, featuring a Snapdragon 660 processor, 6GB of RAM, and even 64GB of internal storage. There’s a nice 12-megapixel camera, and it works on all GSM networks.

If you don’t mind spending a little extra money, the Samsung Galaxy S8 is one of our favorites in terms of physical QWERTY keyboards. This one doesn’t come with one out of the box. You’ll have to purchase one of the physical keyboard accessories from Samsung that attaches directly to the phone. However, if you’re wanting the Samsung Galaxy experience, but with the QWERTY keyboard, you can’t go wrong with this choice. You can pick up the necessary keyboard for it here.

As you know, the Galaxy S8 has some wicked fast hardware in it — it’s got Samsung’s famed Infinity Display, a fast Snapdragon processor, 4GB of RAM, 64GB of storage, and support for most GSM networks. 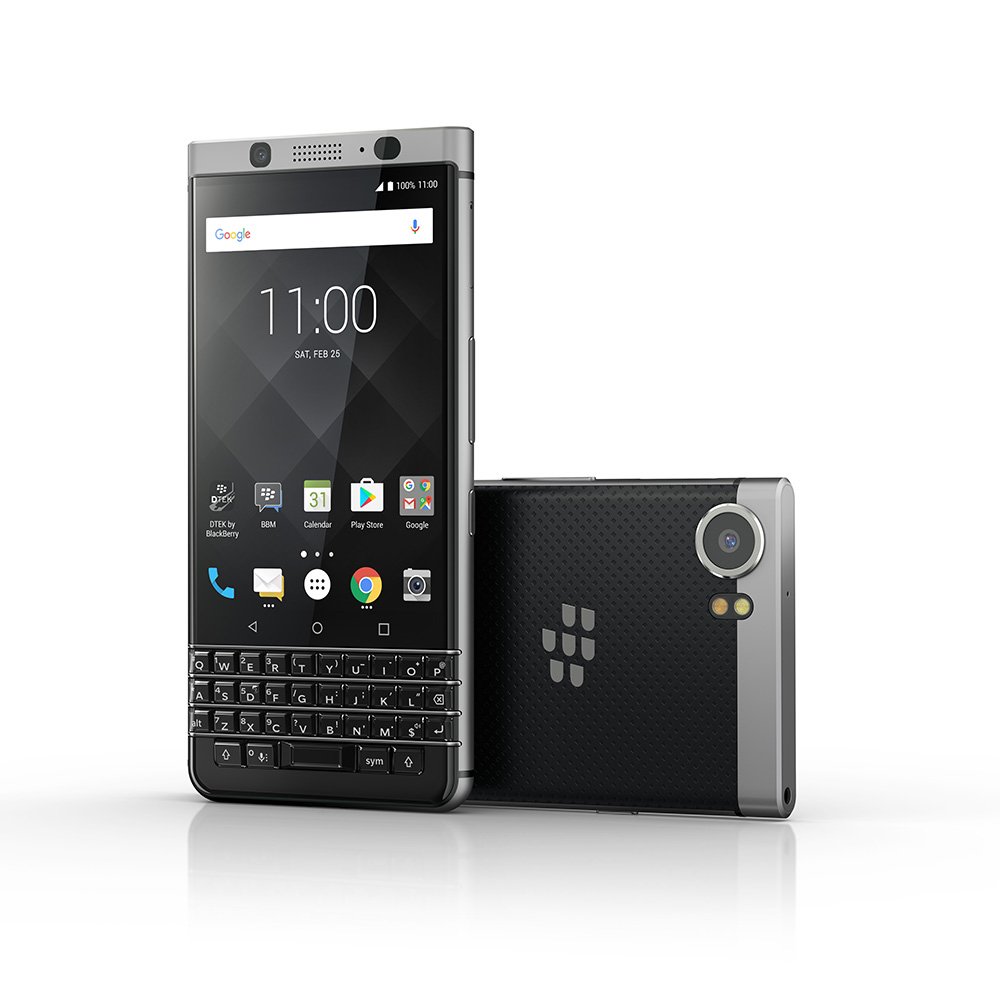 BlackBerry, a company that was once renowned for its business-oriented smartphones with physical keyboards, has to fight for significance in a world dominated by virtual keyboard typing experience. Just like Clark Kent dressed in casual clothes, the BlackBerry Priv looks deceptively ordinary, perhaps except the curved display. But it takes just a quick slide to reveal Priv’s 4-row QWERTY keyboard is hiding underneath the screen.

The keyboard also features an integrated trackpad and several programmable keys for launching apps and changing the position on the screen. You can swipe up across the keyboard to access a full-sized virtual keyboard with unique characters and symbols. Clever stuff, indeed.

Also hiding under the 5.4” display with 540 PPI is the powerful Qualcomm MSM8992 Snapdragon 808 chipset, 3 GB of RAM, 32 GB of internal storage space, and Adreno 418. With such high-end specifications, the Priv is a productivity beast with ample power to fuel any multitasking (or gaming—we won’t judge) frenzy.

While the Android operating system looks close to the pure Android experience that you get on Nexus devices, BlackBerry has made a lot of changes under the hood. Privacy and security have been given special attention, for example, with the BlackBerry DETEK app, which can tell you how secure you are and what improvements you can make.
Pros

The age of the Q is over. There’s no point denying it, arguing it, or sugarcoating it. Flagship physical QWERTY phones are long gone, and they’re not coming back. Sad? Damn straight, as we all remember how we used to be able to send like five texts a minute on a full-size keypad-boasting handheld.

Since phone manufacturers only aren’t seeing too much demand for Android smartphone with a keyboard, they just aren’t releasing too many new variants of these.  But if you need that keyboard, a good workaround is to get the latest and most excellent smartphone you can find, and get a mini Bluetooth keyboard that you can carry around with you and sync with your phone.  If that doesn’t work for you, then check out these smartphones with the keyboard currently on the market.

Yes, they were bulky, clunky, even ugly, but they got the job done in a way no touchscreen-toting iPhone or Samsung Galaxy S will ever get close to. Whatever “highly intuitive” apps like Swiftkey or Swype evolve into.

It’s also odd though how every mobile player (save for BlackBerry, maybe) turned their backs on productivity-centric gadgets all of a sudden, especially when Samsung, LG, and Sony are so vocal about the diversity of their product lineups. Cater to the needs of everyone, my arse. Where’s my Galaxy S5Q, my LG G2 Slider, and my Xperia Z2 Chat?

Still stuck on Android 4.0 Ice Cream Sandwich, we have the LG Mach. This isn’t a bad choice for a QWERTY phone if you don’t mind old technology. It still runs that the old version of Android and software support has pretty much been dropped. It’s quite slow by today’s standards, but that keyboard is still quite nice.

Despite its retro design, and overall underwhelming hardware, the Verizon-exclusive Stratosphere 2 is not the worst QWERTY option around. Up for grabs via Amazon and Best Buy free of charge in a contract-tied flavor, the slider is on Android 4.1 Jelly Bean, weighing 14 grams less than the Mach.

The juicer is a tad beefier, at 1,800 mAh. The Super AMOLED panel isn’t too bad in comparison to the time that this phone was launched. The dual-core 1.2 GHz SoC is pretty slow by today’s standards but will get you by.

Though its two months older than the second-gen Stratosphere, the S Relay 4G is superior to its Verizon counterpart, primarily in the aesthetics department. Less pronounced curves equal more elegance, not to mention the Relay is slightly slimmer while retaining the 1,800 mAh ticker.

One of the last remaining Mohicans of a lost era, the Droid 4 has aged rather gracefully, but it has aged nevertheless.

Downsides? The 1,785 mAh battery is pretty tiny, plus non-removable.

The youngest of the bunch, released but a few weeks ago on T-Mobile, the F3Q looks like a violent blast from the past design-wise, with a funky turquoise blue physical keyboard and an even swankier textured rear cover.

I think the blue-black color combo is a bit too much, but hey, kids may dig it, and in the long haul, it could help QWERTY phones become hip again. The device isn’t bad for its time, featuring a dual-core 1.2 GHz Snapdragon 400 running the hardware show, aided by 1 GB RAM.

The 4 GB on-board storage is cringe-worthy, as is the 14 mm waist, yet software upgrades beyond 4.1 Jelly Bean could be on the horizon, and that should count for something. Also, it packs a gargantuan 2,460 mAh battery, capable of holding a single charge for up to 16 hours of talk time and 16 days (!!!) of standby time.

Yes, I realize the Enact and Optimus F3Q are, in many ways, virtually identical. From the design language to the CPU, RAM, and battery life. Yet I like to think of Verizon’s Enact as F3Q’s classier brother.

And the rear looks better too, in my humble opinion. Also, on 4.1 Jelly Bean and likely to be upgraded before long, the Enact doubles down on storage.

Not sure whether we should laugh or cry, seeing a mid-2012 phone top a 2014 list. But that’s how behind the market is for QWERTY aficionados. And mind you, the Photon Q was hardly a high-ender when it first saw daylight, back in July 2012.

Up for grabs for free with 24-month Sprint agreements, the big guy weighs in at a massive 170 grams. However, it offers the most generous screen real estate of all seven QWERTY world champion title candidates: 4.3 inches.

The resolution is decent, 960 x 540, there’s scratch-resistant glass on top of it, a dual-core 1.5 GHz chip beneath the hood, Android 4.1 Jelly Bean, 1 GB RAM, 8 GB storage, 8 MP primary camera with LED flash, 4G LTE and microSD support. Compared with, say, the Galaxy S5, it’s a featherweight, but as I said, it’s all we got.

QWERTY keyboards on Android phones might be far and few between, but they are making a comeback, particularly in the form of what is now TCL’s BlackBerry. BlackBerry’s phones are fast and provide you that quick, easy, and tactile keyboard experience. Other brands offer QWERTY keyboards, but BlackBerry is probably the one with the best hardware today.