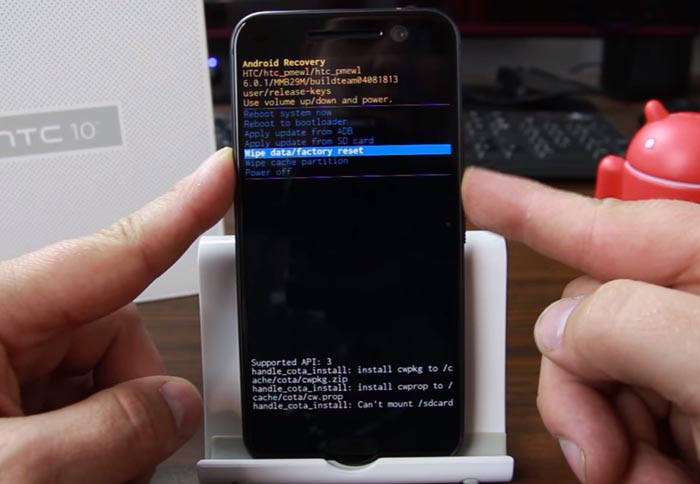 An HTC 10 that won’t turn on, can’t boot up. It’s because power is necessary to make both the hardware and firmware running. Without it, your expensive premium phone will be just another useless object on your table.

Just because your phone powers up doesn’t mean it can boot up. We’ve received a lot of complaints from our readers who experienced being stuck during boot up while others reported that their devices will reboot as soon as it’s finished booting up.

In this post, I will look into these issues and will provide some troubleshooting procedures you can follow to try and fix them. Read on to learn more about power-related issues with the HTC 10.

Troubleshooting HTC 10 that won’t turn on

Power-related issues can be attributed to faulty hardware and accessories or can be caused by some serious firmware conflicts. Issues that belong to the first category are often handled by technicians, however, you as the owner should rule out other possibilities first before sending the phone in for repair. If your HTC 10 isn’t turning on, these are the things you can do:

Step 1: Attempt to boot up the phone in any way possible

This is going to be the first thing you need to do as long as the HTC 10 didn’t suffer from liquid damage because if it did, the reason why it turned off is because its circuits have been messed up and it’s possible that the motherboard board got fried or the battery got damaged. In this case, you don’t need to undergo the troubleshooting procedures below, instead, send your phone in immediately so the technician can do further tests.

Assuming that it just turned off on its own and won’t turn back on, then there are things you can try to see if it really won’t power up.

The first procedure is supposed to turn the phone on normally while the second one is to force reboot the device in case the system crashed. These alone may bring your phone back to life provided that the problem was caused by some minor app or firmware glitches that may have left the device unresponsive.

However, if your HTC 10 still won’t turn on after doing those procedures, then try to see if it can power up and load its bootloader. Follow these steps…

If you phone can boot in recovery mode, then you can fix the problem on your own without any help from a technician because apparently, the problem has already been addressed at this point–the device already turned on!

You can reboot it normally to see if load up Android’s interface and let you use it. If it still won’t boot up, then try to boot back in recovery mode by following the same steps above and this time, try wiping the cache partition and/or doing the factory reset.

Step 2: Plug the charger in to see if your phone responds to it

Normally, if the HTC 10 detects current is flowing through its circuits, it will display the charging indicator on the screen and lights up the LED indicator (solid orange light). When they show, you can rest assured that your phone’s hardware is fine and that the problem might be with the firmware. But if they don’t, there’s a possibility the device is suffering from a hardware issue, although you still have to rule out the possibility that the system just crashed and that there wasn’t enough battery to power up its components. And for this, all you got to do is press and hold the Volume Up and Power keys together for 10 seconds while the phone is plugged in.

If your HTC 10 reboots, then it was simply a system crash. Let the phone charge until it’s full and when the same problem happens a few times after this one, then it’s an indication that some files may have been corrupted.

Try to find out if there’s an available update and if there is download it and do the master reset. If there’s none, then it’s still advisable to do the reset but don’t forget to backup all your data first.

Troubleshooting HTC 10 that won’t boot up

Not being able to boot up is the result of the firmware’s failed attempt to load up the user interface as well as other necessary services. More often, owners can encounter black screen while others may be stuck on the logo. As you may have already guessed, it has something to do with the firmware, although some hardware issues may also result to this problem.

Step 1: If the problem occurred after a firmware update

There are times when the system cache gets corrupted either by apps or the new system. When this happens, there might be an impact on the phone’s overall performance; some devices may become noticeably slow, others may keep rebooting and some may be stuck during boot up. This of course is just a possibility but you need to rule it out before you can proceed to the next procedure as it may save you from all the hassles.

You need to delete the old system cache so that the new firmware will be forced to create a new one that is perfectly compatible with it. To do it, you just have to boot into recovery mode and wipe the cache partition from there:

Step 2: If the problem started without apparent cause or if the previous step didn’t fix it

There have already been countless reports from owners who encountered this problem but haven’t noticed any apparent cause. Sadly, there’s no way we can figure out the reason why the phone is acting like this if we can’t get our hands on it. However, based on reports and testimonies, corrupt data and system files are often the reason why the phone won’t boot up all of the sudden. It may happen after an update, too.

So, if you’ve already tried wiping the cache partition and the phone is still not booting up successfully, then you need to do the master reset. This time, all your files, data, apps, calendar events, music, videos, etc. will be deleted but if it’s the only way to make your phone work again, it may be worth it.

If all else fails, you need to send the phone in for checkup and/or repair.