If there’s one thing that smartphone users hate more than anything else, it’s running out of battery power. That’s what a consumer satisfaction research firm, J.D. Power and Associates, found out when they questioned 7,080 first-time smartphone users. Even though researchers and tech companies are working hard to develop new, longer-lasting types of batteries, it will likely take a while before they become readily available. Until then, the only way how to avoid the dreaded “low battery” warning is to purchase an Android smartphone with an excellent battery life. We have selected top 5 such devices, so the only thing that you have to do is decide which one you like the most. 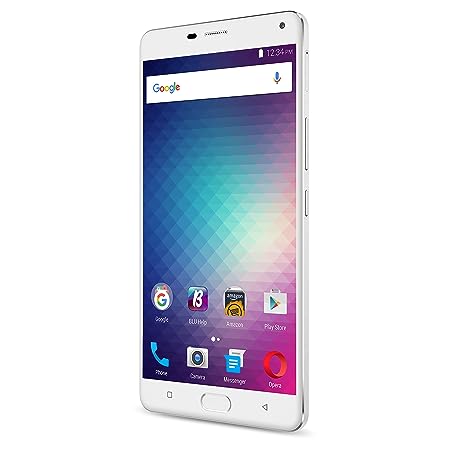 Since the company was founded in 2009, they have managed to win many customers thanks to the sheer value their devices are famous for. The BLU Energy XL is no different, making a fantastic impression from the first moment we had the pleasure to hold its brushed aluminum body in our hands. The rounded edges make you forget that you’re holding more than 6” wide chunk of metal. We still wouldn’t advise you to use the device with just one hand, but we can’t say that it’s impossible either.

The metal body features a rounded home button that looks like it ran away straight from the Galaxy Note 7 to hide from the massive recall that is going to cost the South Korean multinational conglomerate company millions. Apart from being just a simple home button, it also hides a fingerprint scanner for enhanced security and more convenient unlocking. Excellent connectivity is provided by the USB Type-C port, 3.5mm audio jack, and Bluetooth 4.0 with A2DP.

The generous amount of internal storage space, 64 GB, can be extended with the help of the included microSD card slot. There’s also a second SIM card slot, to satisfy the needs of international travelers and all those who want to use two carriers to get the best deal they can.

Even though the “XL” in the name of this smartphone refers to its extraordinary large battery, it could as well refer to its gorgeous 6.0” AMOLED display. With its full HD resolution, the display has a pixel density of 367 ppi. Corning Gorilla Glass 3 provides a great protection against scratches and all other consequences of daily use.

A flawless performance is delivered by the MediaTek MT6753, a 64-bit octa-core WorldMode 4G LTE platform based on the ARM Cortex-A53 64-bit processor with ARM Mali-T720 graphics. It has sufficient power to run all the latest games and makes multi-tasking buttery smooth.

But all this power would be of no use after just a few hours, if it wasn’t for the non-removable Li-Po 5000 mAh battery, which powers this large smartphone. Unless you treat your smartphone as a gaming console, you are guaranteed to get 2 full days of usage from the Energy XL. And if you do your best to conserve the battery power, you can expect as much as 4-5 days on a single charge.

There’s really just one aspect of this smartphone where BLU had to cut some corners: the camera. The rear-facing camera has a resolution of 13MP, and the front camera is a 5MP unit. Both cameras are responsive, but they produce somewhat washed out pictures that look dull without post-processing. 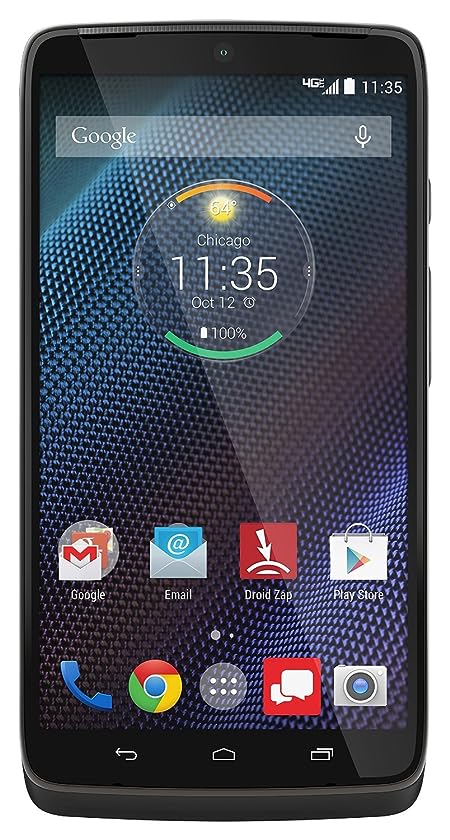 Motorola was once known for a flip phone named after a part of every shaving kit—or a weapon of choice of sinister horror movie characters, depending on your imagination—the Motorola Razr. As a progressive company that knows when it’s time to try something new, the Motorola DROID Turbo has abandoned the pursuit of slim lines in favor of beefy specifications. This, in combination with the compact, 5.2” Super AMOLED capacitive touchscreen, makes for a supremely comfortable device that can be easily operated with just one hand.

The screen may be smaller than what’s considered as a regular size by today’s standards, but it’s quad HD resolution and pixel density of 565 ppi put it into a league of its own. While it’s debatable whether those two hundred or so additional pixels per inch make a difference in practice, there’s no denying that the display looks gorgeous. Movies and pictures are bright and vivid, text is crisp and clear, and games feel responsive.

Speaking of games, the Snapdragon 805, a quad custom Krait CPU designed to enable end-to-end 4K Ultra HD while providing outstanding battery life and processing efficiency, coupled with 3 GB of RAM still holds up great even 2 years after the initial release of the smartphone.

What also holds up is the astonishing 21MP rear camera with f/2.0 lens. Motorola went with a sensor of this caliber partially because they wanted to fix their reputation after the fiasco that was the Moto X camera, and partially because it would give customers a very good reason why go with the DROID Turbo even two years after its release.

But as far as we are concerned, the main reason why anyone should purchase the DROID Turbo is its battery life. The non-removable Li-Po 3900 mAh battery allows you to watch the complete Star Wars saga from The Phantom Menace all the way to The Force Awakens. That’s 933 minutes or 15 hours and 33 minutes. Yes, you need to have the brightness down to 50 percent, but that’s still a pretty epic achievement, don’t you think? And when you finally run out of juice, it takes just 30 minutes to charge the battery to 60 percent, thanks to the Quick Charge 2.0 technology.

The recognizable manufacturer of construction and mining equipment, diesel and natural gas engines, and industrial gas turbines has expanded their portfolio with the Caterpillar CAT S60, a rugged Android smartphone designed to operate in extreme conditions.

Its raison d’être is to help construction workers, miners, and all other people who often find themselves in contact with water or exposed to dust and debris. To accomplish this goal, the smartphone meets the IP68 specification, making it waterproof up to 5m for 60 mins with closed lids that cover its ports. The device also has a drop-to-concrete resistance up to 1.8m and is MIL-STD-810G certified to survive exposure to salt, dust, humidity, rain, vibrations, solar radiation, and thermal shocks. In other words, the CAT S60 is one tough cookie.

Like this wasn’t already enough to secure it a place in the toolbox, the smartphone also features a thermal-imaging camera. The camera is located directly above the 13MP rear camera on the back side of the smartphone. It works with apps from FLIR, the world’s largest commercial company specializing in the design and production of thermal imaging cameras, since it’s the same camera as the one found on the Flir One thermal camera accessory kit available for Android and iOS devices.

The Qualcomm Snapdragon 617 processor with X8 LTE delivers butter-smooth performance, and the presence of 3GB of RAM means that you can switch between multiple apps without having to close any other apps running in the background just to reclaim a few extra megabytes of memory space.

All the added ruggedness left room only for 4.7” display with 720p resolution. The small screen size is actually an advantage here, as the pixel density ends up at 312 pixels per inch. An additional layer of protection against scratches is provided by Corning Gorilla Glass 4.

Of course, the reason why we have the smartphone on our list is the non-removable Li-Ion 3800 mAh battery, which can power it for a very long time. It makes sense for CAT to make the smartphone bulkier in favor of its longevity. After all, job sites don’t exactly provide an abundance of charging opportunities. That being said, running out of battery power with the CAT S60 isn’t exactly the end of the world. Using the Quick Charge 2.0 technology, it’s possible to charge the smartphone back to 60 percent in just 30 minutes. 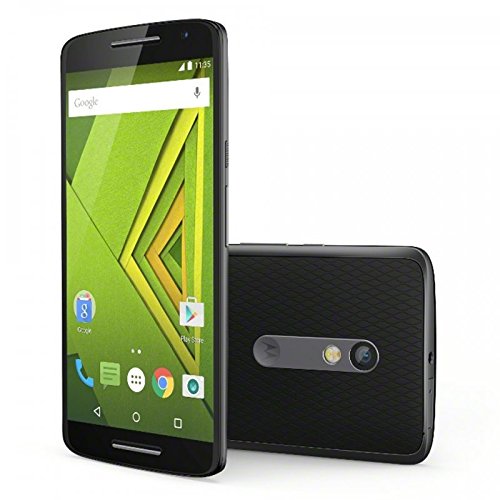 Following the immense success of the Moto G, Motorola has really nailed down their formula for creating attractive Android smartphones. Their approach revolves around keeping things simple and including, at least, one or two killer features with each model. The same holds true for the Motorola Moto X Play, a smartphone that’s more powerful than the cheap Moto G but not nearly as expensive as the Moto X Style.

This time, the killer features are the smartphone’s long battery life and its glorious 21MP rear-facing camera. According to Motorola, the non-removable 3630 mAh battery should last two days of heavy usage, which is a great news for all productivity freaks who can’t spare the hour or two it takes to charge the smartphone back to its full capacity.

The 21MP sensor with f/2.0 lens features phase detection autofocus, dual-LED flash, automatic face detection, panorama mode, and many other extra features that make picture-taking with the camera a real joy. The front-facing camera has a resolution of 5MP and a decently bright, f/2.2 sensor.

For such an affordable smartphone, there’s a lot going on under the hood. The Qualcomm MSM8939 Snapdragon 615 delivers a stable performance in all recent titles, and internal storage space can be extended with a microSD card. Even though 2GB of RAM are nothing to brag about by today’s standards, the vanilla version of the Android operating system found in the Moto X Play doesn’t really need much more to run smoothly.

To keep up with the latest trends, Motorola has pumped up the size of the screen, making it 5.5” large with full HD resolution. This results in 403 ppi pixel density, making everything as sharp as the human eye can see. When compared to Super AMOLED displays, the IPS screen present in this smartphone doesn’t exactly amaze with its contrast or color accuracy, but, as far as the budget category is concerned, the overall viewing experience is pleasant. 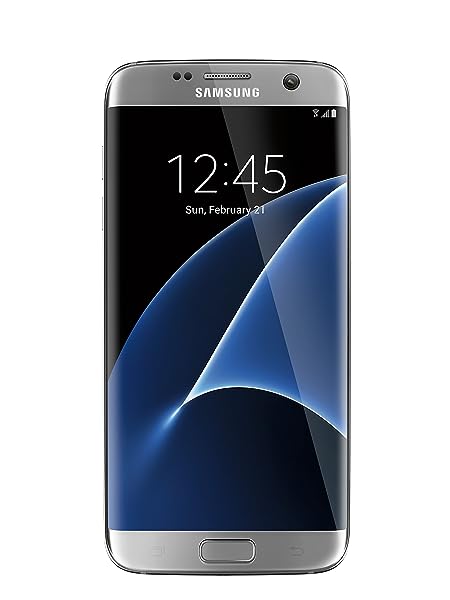 The Samsung Galaxy S7 Edge captured the imagination of customers from all over the world with its high-end specifications, stunning design, curved screen, and camera so good that it makes DSLRs feel obsolete for the average user. Despite its massive success, the smartphone had one big flaw: short battery life. Engineers over at Samsung knew that the successor must last a lot longer to receive raving reviews.

The result of their combined effort is a 3600 mAh battery that can power the new Galaxy S7 Edge for an entire day and can reach 60 percent of its maximum capacity in just 30 minutes. What’s more, the smartphone supports either the Qi or PMA wireless charging standards, depending on the target market.

It doesn’t hurt that the rest of the smartphone is just as impressive, if not more. At the core of the beast lies the Qualcomm MSM8996 Snapdragon 820 mobile processor. Its new Qualcomm Kryo CPU has 2x performance and efficiency when compared to the CPU of Snapdragon 810, and the Qualcomm Adreno 530 GPU offers 40 percent improvement in graphics performance, compute capabilities, and power usage when compared to Adreno 430. This powerful combination of CPU and GPU is complemented with 4 GB of RAM and 32 or 64 GB of internal storage space, which can be further extended with microSD cards.

The Galaxy S7 Edge sports a stunning 5.5” 1440p display with 534 ppi pixel density. The AMOLED screen is protected using Corning Gorilla Glass 4, and the entire smartphone is IP68 certified, making it dust proof and water resistant over 1.5 meters and 30 minutes. 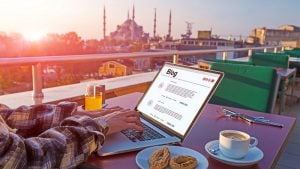