So you’re looking at picking up a new smartphone, and thus far, you’ve got it narrowed down to the LG V40 and the LG G7 Thin, the decision can be difficult. That’s because the two devices are extremely similar, with very few significant differences between the two phone models; however, there are differences, so if you want to make sure that you’re getting the perfect smartphone, you’ll want to follow along below. We’re going to show you all of the major differences between LG’s two flagship phones, and hopefully help you make a more informed purchasing decision. Let’s dive right in, shall we?

The biggest difference that you’ll come across between the LG V40 and the LG G7 ThinQ is that the LG V40 is a much larger device. You could think of it as the Galaxy Note 9, a much larger device designed for power-users. That’s what the LG V40 ThinQ is to the LG G7 ThinQ, and it shows in the specs — you get a large 6.4-inch OLED display. Due to this, it comes in a slightly larger and weightier overall size. Dimensions for the LG V40 actually come in at 158.7 x 75.8 x 7.7mm, and weighs 169 grams.

Another significant difference between the two smartphones is the camera setup. The LG “V” line of smartphones was actually designed by LG for creators — they wanted to give creators much more control over what they could do with the camera and video recording capabilities. Now, some of that same functionality has come to the LG G7 because of shared software — however, the V40 still has the more unique camera system — a three-lens horizontal camera setup.

If you’re a creator, you can just imagine all of the options that this opens up for you when it comes to photo taking and video recording. The LG V40 actually takes things a step further and comes equipped with a dual front-facing camera system — this one is equipped with an 8- and 5-megapixel sensor, even allowing you to create a bokeh effect.

Finally, there are some smaller differences — you’ve got the slightly larger 3,300mAh battery in the LG V40, then the 6GB of RAM inside as well. 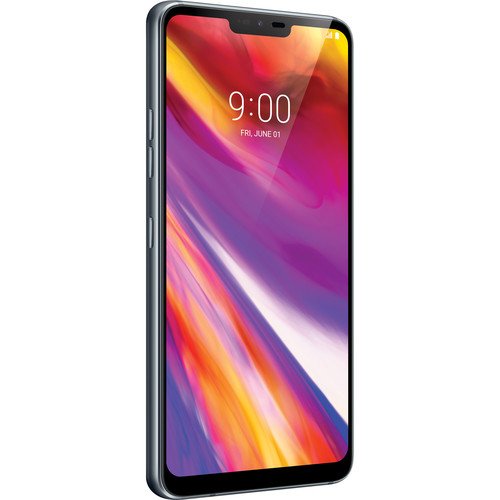 Since the LG V40 is designed as the creator, power-user device, you’re going to notice some lesser overall performance. One not entirely bad thing is that the LG G7 ThinQ is overall thinner and less weightier. It measures in at 153.2 x 71.9 x 7.9mm. and weighs in at a smaller 162 grams. It also has a smaller display, coming in at only 6.1-inches. The display also isn’t necessarily as clear and detailed, because LG uses an LCD panel for it instead of the OLED panel on the V40.

It has the same processor as the V40, but it is equipped with less RAM at just 4GB. You also get a smaller battery at 3,000mAh, though this supposedly doesn’t change actual battery use times because you’re not pushing all of those extra pixels in the 6.4-inch screen, and then you have slightly less hardware to power.

As you can see, there are a number of difference between the LG V40 and the LG G7 ThinQ. Those differences do mean a price increase on the LG V40’s side; however, creators might find the extra camera features worth the upgrade. No matter which phone you choose, you’ll still get the excellent performance that you would expect out of a flagship; however, the LG V40 just has some other improvements that would make it more viable for, say, creators who regularly vlog or take high-definition 4K video.