Skip to content
In the market for an Amazon Kindle Fire 7? They are great little tablets — affordable, powerful, and have a massive ecosystem, thanks not only to many of Amazon’s services available, but their massive appStore, too. However, there’s only so much quality Amazon can pack in such a cheap tablet, so it’s no surprise that the tablet itself feels very cheap and easy to break. It’s not too big of a deal, but is a testament to how much you need a case alongside your Fire 7 purchase. Not sure what case to pickup? If you follow along below, we’ll show you the best cases you can for the Kindle Fire 7 right now. Here are our top picks. 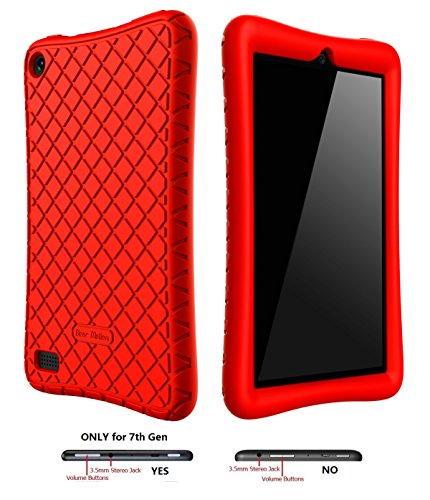 If you’re looking for a case that will let the Amazon Kindle Fire 7 take a beating, then you’ll want to consider the Bear Motion Case. Yes, this case is advertised everywhere, but that’s because it makes it virtually indestructible in the hands of a child. Children tend to get mad and throw tablets, drop tablets, leave them laying on the floor, which is super frustrating and sometimes nerve wracking that the tablet will break. However, you can rest easy with the Bear Motion Case, as it’ll keep your Fire 7 protected from much of their destruction. 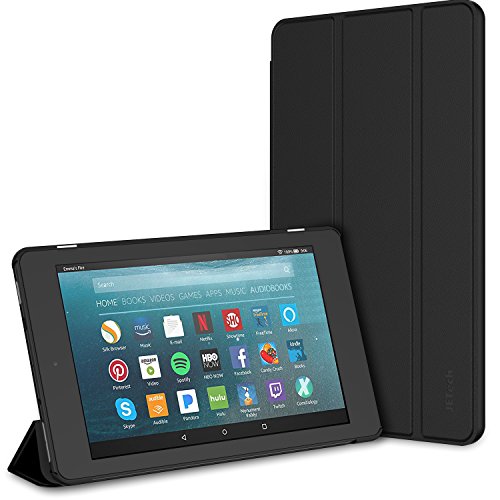 One of the problems with Amazon’ Fire 7 is that it was primarily designed for media consumption — Amazon wanted to provide a cheap way that consumers could watch things like Prime Video, Netflix, YouTube, and more. However, it’s super uncomfortable to watch media on the Fire 7, simply because you have to hold the tablet up while you watch, or you have to lay it down on a surface and position your head at an odd angle.

This is where the JETech Case comes in. It puts your Fire 7 in a protective enclosure to keep it from breaking, but it also functions as a kickstand. It has a magnetic screen cover, which when taken off, can be turned into a stand that your Fire 7 rests on. The case itself isn’t overly protective, but will keep it free from scratches and protect it against light drops. It’s similar to what Apple’s iPad Cover looks like. 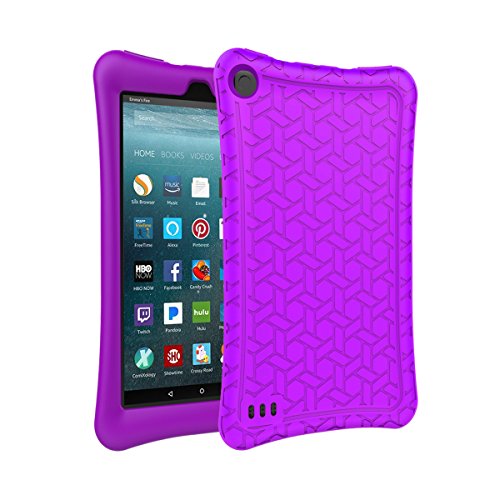 Or, maybe you’re looking for something slim that will keep your Fire 7 protected against light drops and shock. In that case (pun totally intended), look no further than the AVAWO Silicone case. This is a slim rubber case that easily fits around your Fire 7, keep it free from scratches, scuffs, and even many of those drops kids manage to put the tablet through. It comes in a variety of kid-friendly colors as well, so there are tons of bright and vibrant options to choose from. It has all the necessary cutouts for the ports and buttons, and even provides a nice anti-slip texture to hopefully reduce drops.

Need something that’s a little more protective? Consider what BMOUO has to offering in their Fire 7 Carrying Case. This covers up your entire Fire 7 (sans the screen) in a hard silicone shell that will keep it protected from drops, shock, and other dangerous drops. At the top, you have a handle that comes out from the case, allowing you to carry it around without too much trouble. It’s designed to be a kid-proof case, so in this case, your Amazon Kindle Fire 7 will be virtually indestructible. The case itself even comes with a five year warranty.

Let’s face it: the Amazon Fire 7 is a bit of a plain looking device. Really, not a whole much went into this device with it only being $50. However, you can spice the tablet up a little bit with a case, specifically the MoKo Case. This case is designed with a beautiful floral pattern that’ll give your Fire 7 a unique look. Not only that, but the screen cover on the MoKo 7 can fold into a stand for the Fire 7 so that you can comfortable watch all of your favorite media or read a book without having to hold it in an awkward position.

We listed five of our favorite Kindle Fire 7 cases here. However, there are countless others available, but these are without a doubt some of the best for keeping your Fire 7 in one piece. If you need all encompassing protection, the Bear Motion Case and BMOUO Carrying Case will be right up your alley, whereas the JETECH Case and MoKo Case will bring you the function and style that the Fire 7 desperately needs.