While a dog is a man’s best friend, it may not necessarily be safe to let them out with kids. However, there are multiple safer replacements for actual dogs in the form of robot dogs. These toys, while keeping your kids’ company, will also teach them a thing or two about pet care. They are designed to mimic the real pet experience but without the obvious dangers of it. So which robot dogs are good for your kids? Well, there are a variety of models to choose from, which can make a choice rather confusing. 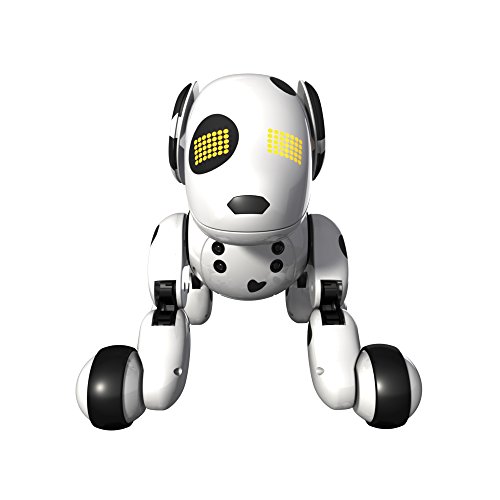 This is the successor to the wildly popular Zoomer toy and comes with twice the fun and action. It comes with 2X the tricks onboard, including the ability to bark, talk, or even walk around with you. It can also interact with you by letting you touch its paw or shake hands. The best part about this robot is that its rechargeable, which allows you to get it up and running in no time after a full day’s play. It’s recommended for kids aged 5+ and is an excellent tool to learn about dogs as kids grow up.

Since this toy can also speak with its users, it can understand commands in English, French, and Spanish. It can also learn new tricks like lying down, rolling over, etc. to further increase interaction with your kids. The toy can instantly recognize when you’re not paying attention to it and wander off into the distance, pretty much like a real dog. As far as interactive and learning abilities are concerned, this offering is one of the best out there. 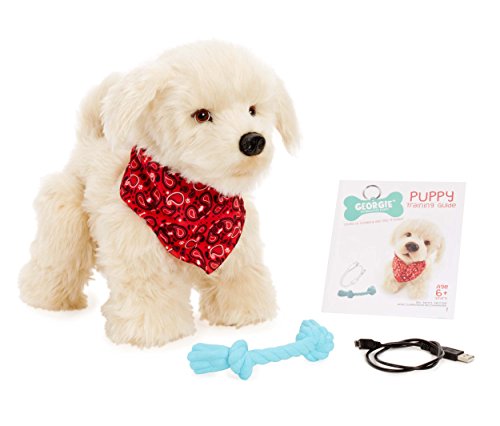 This is a plush puppy toy that lets your kids interact with it and even cuddle if they feel like. It can understand voice commands and respond accordingly, although it doesn’t come with all the smart features that we see with interactive dog robots. But that shouldn’t concern users as this is still pretty interactive with the ability to perform more than 100 interactions of random puppy behavior to replicate the real experience. It’s pretty much like your kid owns a dog but without any of the mess. It comes with a rechargeable battery, while the company also offers a charging cable to make things easier.

The supplied hang tag can be used as a collar or even an ID tag to help get the toy safely back to you. Some of the behaviors that this dog can demonstrate include high-fives, selfies, standing up, staying put, and so on. This toy is recommended for children aged 6 or over. 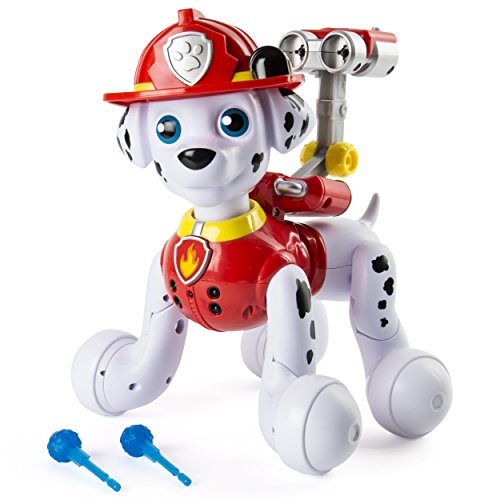 This adorable robot puppy toy comes from Zoomer and can mimic the characters of the animated TV series Paw Patrol. Although it cannot understand when you speak, it comes with over 80 interactive missions as well as tricks. Moreover, it can bring out more than 150 phrases and sounds as well. There’s a special water cannon on the toy which can be activated during missions. The toy can also perform the Pup Pup Boogie and Paw Patrol Theme on its own, which will strike a chord with the kids. All of this can be activated with an easy push of the toy’s head.

Given the nature of this toy, the company recommends this for kids aged 3+. One caveat here is that this toy runs on four AA batteries, and none are offered with the packaging. This means that you need to get your rechargeable batteries or replace the four AA batteries each time they run out. The average run time of the toy may vary depending on how often it is used. 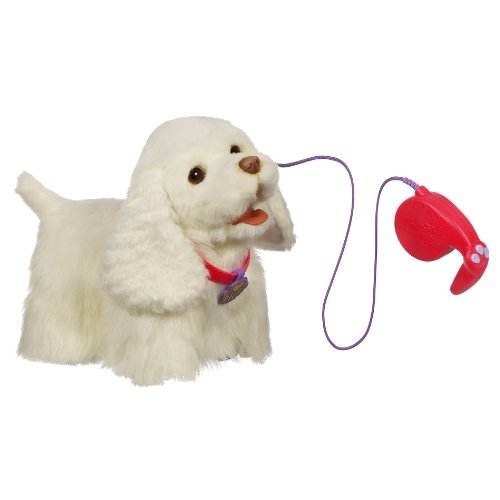 This is yet another appealing toy for kids that allows not only general interaction but also physical activity. Using the remote-controlled leash offered with the toy, kids can walk their dogs as they would with a real puppy. While in use, the puppy can also make barking noises and wag its tail to mimic the real deal. This toy is modeled on the popular Bichon Frise breed of dogs. It comes with soft-touch material, making it comfortable to cuddle or sleep with.

As for the aforementioned remote control, it has easy to understand controls that allow the child to play along with the pup. For example, there’s a try button, which makes the toy respond to motion or speech by barking. The On mode, on the other hand, encourages your child to take the pup on a walk by tugging on the leash. Moreover, the toy can respond based on your behavior and can show displeasure if you’re tugging on the leash too hard. Taking these factors into account, this toy is certainly a good way to get trained for the real puppy experience. 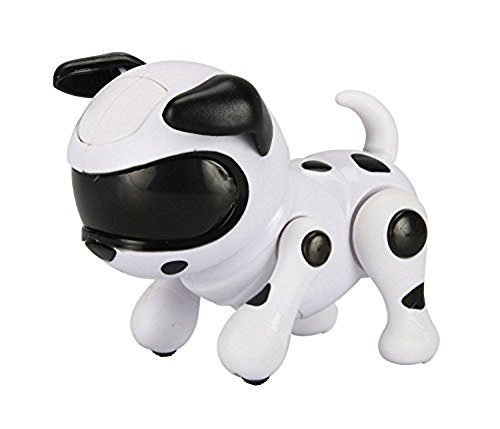 This highly-advanced puppy toy can offer a variety of functions, including the ability to jump, walk as well as play. What’s even better is that you can train the robot to jump into your arms on command, which can be a great party trick for kids. If you have other toys from the Tekno Newborns series, this toy can automatically interact with them. To add more realism to this interactive toy, the pup will also wiggle its tail and ears. When powered, the digital eyes of the toy lights up and can actively respond to your commands.

In terms of behavior, it’s comparative to an 8 week old puppy. As you would expect, the toy also has its own speaker, which allows it to make sounds or even sing songs for you. It comes in only one color, so there aren’t a lot of options on offer right now. This can be an excellent addition to your child’s toy collection as it can learn a few things while also spending enough time playing. This robot runs on two AAA batteries, so we recommend purchasing rechargeable batteries to keep the toy operational for long. 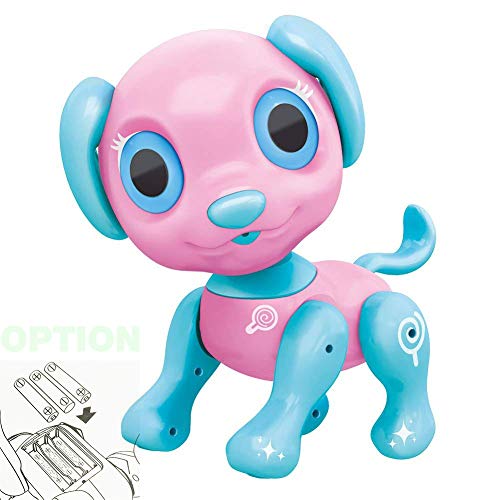 This multicolored interactive toy is suited for both boys and girls, and can undoubtedly increase interaction as well as engagement with pets. Made using child-friendly ABS plastic, this toy is recommended for kids aged 3 or older. In terms of functionality, it certainly has a few tricks up its sleeve. This includes the ability to respond to your voice as well as touch. In addition to this, the toy can also sing and make puppy sounds. It also comes with lights that add to the charm of the toy.

This puppy can offer all the emotions that you would expect from any pet, including anger. It uses three AAA batteries to operate, which can be easily found in the markets. The toy doesn’t come with batteries inside, so you need to stock up beforehand. Removing the battery cover will require an adult, however, as it may need a sharp tool like the screwdriver. The company offers a 6 months 100% money-back guarantee on this product if you’re not satisfied with its performance. 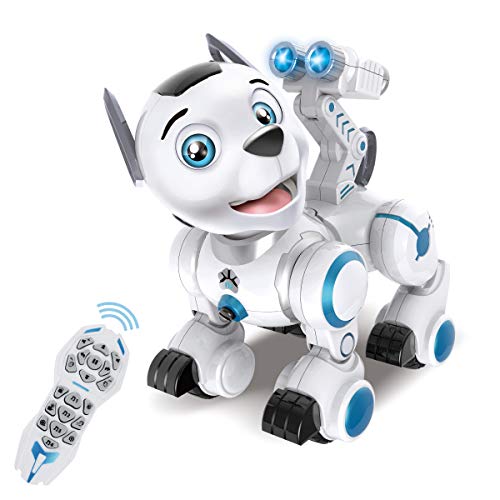 This is a very versatile dog toy that comes with a wide range of features like the ability to walk forward or backward, look left or right, patrol the surroundings, blink, or even perform a cool head spin. One tap of the head lets your kids engage with the toy. Moreover, it comes with multiple programmable functions that can be customized as per your child’s preferences. The toy also comes with 4 preset dances and its songs to entertain your kids.

Given the number of actions this robot can perform, it makes sense why the company offers a comprehensive remote control with this. This remote can help you control almost every aspect of the pup, making it a handy tool that allows you to control the toy from a distance. What I also like about this product is the fact that it comes with a rechargeable 3.7V battery. However, the remote uses two AAA batteries, which are not included with the toy. The company uses child-safe high-quality plastic, so your kids are completely safe with this toy. 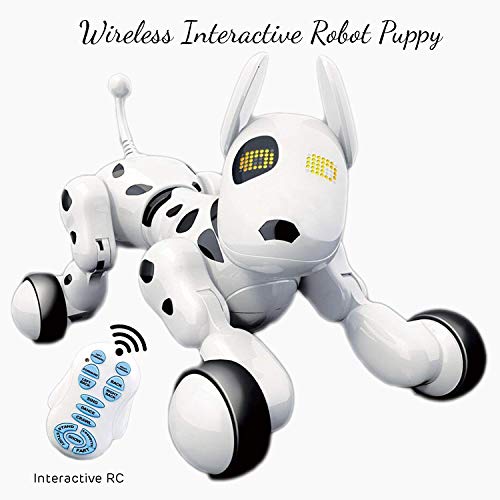 This is an exciting dog toy that can also help kids learn in the process of having fun. It can help read through the alphabets and even count numbers to encourage learning among younger children. Much like the product we talked about above, this puppy comes with a handheld remote of its own, which allows users to control its movement as well as general functionality. It offers a range of up to 35 feet with no obstructions, making this ideal for your child’s playtime. This toy is capable of dancing or even singing on its own.

The company claims this gift is meant for both boys and girls ages 2 – 7. It’s also pretty unique to look at thanks to its single eyepatch pattern. The manufacturer offers 12 months of warranty with this product. 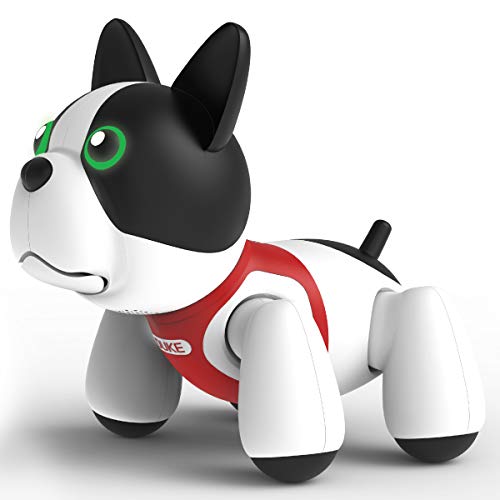 This is a slightly more polished robot dog and can perform a handful of functions that can make this your child’s next favorite toy. It can respond to commands and growl, yawn, snore while also showing a wide range of emotions that make this unique to other toys. It can also respond to the user’s voice and can respond accordingly. Supported commands include “Sit Down,” “Spin Around,” and “Come Here,” with the robot obeying your commands accordingly.

Since this toy is labeled after a Boston Terrier, it exhibits some of the same behaviors, including the ability to move its mouth while barking as well as its tail. It also has LED-based eyes that light up when the toy is active. The colors of the LED change according to the pup’s emotions helping you understand what went right or wrong. The toy also supports a Talking Mode feature, which can be activated when you offer to throw the bone toy and utter the secret command. It can perform some more tricks while in Talking Mode. 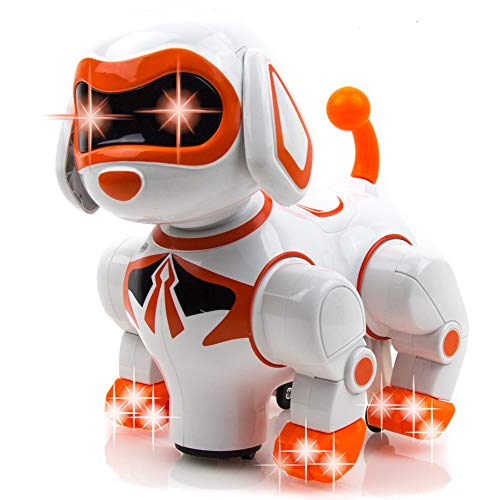 This is a robust and well-designed puppy robot toy that can be used by girls and boys of ages 3+. However, this product doesn’t come with a remote and uses three AA batteries to operate. This can be a minor inconvenience as you will need to store up on batteries before the existing batteries run out of juice.

In terms of features, it comes with multiple flashy lights and the ability to play music as well as make animal sounds. The dog can also walk forwards or back, while it can also nod at you and bark in perfect sync. This toy encourages learning for kids, and can greatly help them understand pet interaction and even improve logical thinking. Be sure to check it out on Amazon. 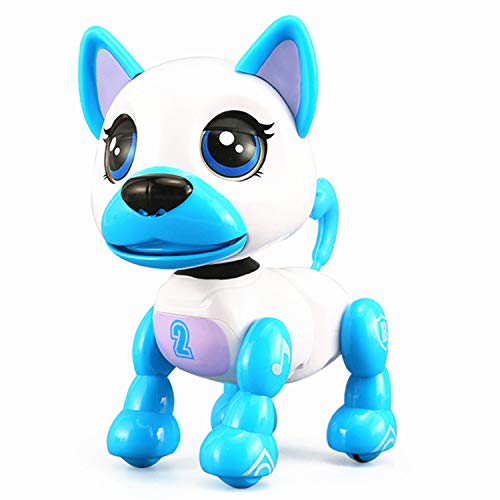 This is easily one of the best looking toys on our list today, and that’s primarily because of the colors that make it appealing to both girls and boys. You get to choose between Blue, White, and Purple/Pink colors, making this one of the few toys to offer color options. Since this is a smart robot, not only can it understand what you’re saying, but also repeat it back to you. It can use a variety of speech patterns or actions depending on your voice command, making this a versatile toy.

In addition to what we mentioned above, the puppy can also blink its eyes, wag its tail, open its mouth, and also shake its head. It runs on a rechargeable 3.7 V battery that charges over a standard micro USB connection, so you’re not required to go around looking for replacement batteries. So as far as features are concerned, this toy is well covered. Have a closer look.