Do you want to do a video recording of the Samsung Galaxy Z Flip 4 home screen? You don’t need a third-party app to do this as your device already has a built-in screen recorder feature which you can easily use to record a video of your screen activity.

The Samsung Galaxy Z Flip 4 is a premium Android phone that uses a foldable display. It’s 6.7-inch AMOLED display can be folded in the middle allowing it to have a more compact shape which makes it easily fit in your pocket. Some of its best features include a Snapdragon 8 Plus Gen 1 chip and a battery capacity of 3700 mAh.

How do I record my screen on my Samsung Galaxy Z Flip 4?

You can capture the screen activity of your Samsung Galaxy Z Flip4 and save it as a video recording on your device. This is useful when you want to send someone instructions on how to use a particular feature on the device or even record your game.

There are two ways you can record screen of your Galaxy Z Flip4. You can do this from the Quick Settings menu or by using Bixby to start a new screen recording.

The easiest way to record video of your screen activity is from the Quick Settings menu.

Pull down the Quick Settings panel by swiping down the top of the screen with two fingers.

In the Screen recorder section, tap Sound. Choose if you want to record Media sounds or Media and microphone sounds.

Tap Video quality and choose High (1080p), which is a Full HD resolution.

Set up Selfie video size by dragging the slider to the right until you get the right size of the selfie video which will also appear in your screen recordings.

Close the settings page and then pull down the Quick settings panel again. From there, tap the Screen recording icon and your phone will start recording your screen.

Another way to record video of your display is by using Bixby. You just need to say, “Hey Bixby, start a screen recording.” This will once again open the pop-up menu in where you will be able to set your preferences for the screen recording.

How do I screenshot on my Samsung Galaxy Z Flip4

If you would rather take a picture of your phone screen rather than do a screen recording, then you just need to take a screenshot. You can do this by simultaneously pressing the power and volume down button at the same time. After doing this, the screen flashes white or you will see a screenshot animation. This means that the screenshot has been successfully taken.

A screenshot toolbar will appear at the bottom of your Samsung Galaxy Z Flip4. There are three buttons available, the edit button, the enable scroll capture screenshots or long screenshot button, and the share to social media button.

Another method you can take a screenshot on your Samsung Galaxy Z Flip4 is by the palm swipe method.

You must first enable the palm swipe feature by going to Settings -> Advanced Features -> Motions and Gestures. There will be an option called Palm swipe to capture. Tap on it to enable.

Once enabled you can take a screenshot by swiping your palm on your phone screen.

If you are unable to do a screen recording on your Galaxy Z Flip4 then here are the troubleshooting steps you will need to do.

Start the troubleshooting by restarting the phone which will close all running apps and processes. The device RAM will also be cleared of temporary data. This procedure will reboot the operating system of the Samsung Galaxy Z Flip 4and reload all of its services.

Perform a software update on your Galaxy Z Flip4

Software updates are constantly being pushed by Samsung to its devices to improve its performance, make it more secure, or even add more features.

You might be experiencing screen record issues because of bugs present in the old software version your phone is running on. 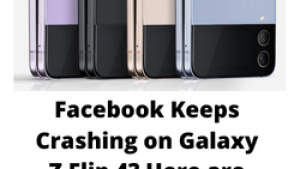