The #Samsung #Galaxy #Note4 is just one of the many smartphone models available in the market that has a quick charge feature. What this does is that it allows the device to be charged from it’s low power state to as much as 60% battery life in a span of only 30 minutes. This is faster than the normal way you are used to charging the phone. There are however instances when charging related problems can occur on this device. This is what we will tackle today as we address the Galaxy Note 4 does not charge completely issue & other related problems. 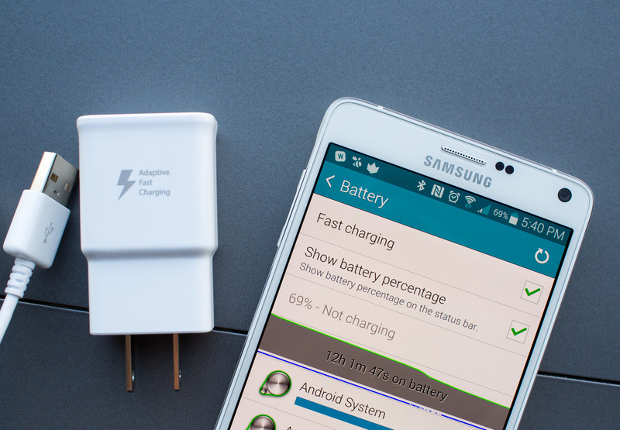 Note 4 Does Not Charge Completely

Problem: Battery does not fully charge charges to 85 and 86% then stops charging and sometimes my phone turned off by itself and won’t turn on unless I take battery out for 10 seconds and then put it back in

Related Problem: My Samsung galaxy note 4 won’t charge to 100% I thought it was the battery but bought another 2 and they charge the same as the other one 85% and sometimes the phone turns off by itself

Related Problem: My Samsung galaxy note 4 won’t charge to 100% I thought it was the battery but bought another 2 and they charge the same as the other one 85% and sometimes the phone turns off by itself

Related Problem: Phone only charges up to 85% only. even when left to charge overnight.I have also tried the safe mode and still charges to 85%. Please help

Solution: Several of our readers are experiencing this issue where the phone will not charge completely but instead stay in the 85% range despite being plugged to a charger for a considerable amount of time. To troubleshoot this issue follow the steps listed below. Move to the next step if the issue still persists.

Note 4 Will Not Fast Charge

Problem: My phone, though I have soft reset, tried three different chargers and four different outlets, still won’t fast charge and will only recognize USB or AC if I’m lucky. I have also cleaned the charger port with compressed air. Is this a problem with my phones battery? Note, my phone is about a year and a half old.

Solution: You did a good job in cleaning the charging port of the phone as this is usually what’s causing the problem. Since the issue still occurs what you will need to do next is to concentrate on the charger next. Try replacing the charging cord of with a new one ( preferably a Samsung branded cord). You should also try using a different adaptive fast charging wall charger.

Moving on to the phone itself you will need to check if the problem is caused by the battery. Try getting a new battery. If the issue persists you need to backup your phone data then do a factory reset.

If the issue still remains after following the above steps then I suggest you have your phone checked at an authorized service center.

Problem: Hello I have a Samsung galaxy note 4 with a battery issues.  I will be using my phone to check facebook text using hangouts youtube and snapchat.  My phone battery will die around 50% – 40% battery life remaining.  It will shut down and will be completely dead.  I took it into verizon and they said that everything is fine and it’s a user issue except my battery has a crack on it is bulging slightly i bought another battery but it is doing the same thing.  please help.

Solution: It’s a good thing that you replaced the phone battery as this is a potentially dangerous situation. The chemicals inside the battery could leak out and this is toxic. There’s also the possibility that it could explode.

Since the issue still occurs even after replacing the battery then next thing that you should do is to backup your phone data then do a factory reset. This eliminates the possibility of a corrupt data or software causing the issue.

If you are still experiencing the same issue after performing the steps listed above then you should have your phone checked at an authorized service center as this may already be a hardware related problem.

Problem: Have had my Note 4 since August 2015 & battery runs out too quickly. Will say it’s at 19% then dies & when I charge it, states it’s at 0%. Even with the power saver on, it goes by too quick. I’ve only been using the charger it came with, but now I have been forced to carry battery packs with me everywhere I go, because the phone dies, so quickly. Even if I’m not using it. The battery will go from 100% to 97% in 30 seconds without me touching it.

Solution: Problems where the battery drains quickly causing the phone to turn off are usually caused by the battery itself. Your phone battery may now be discharging its power quickly. The fastest way to deal with this issue is to get a new battery then check if this resolves the problem.

Note 4 Does Not Turn On Unless Connected To the Charger

Problem: My phone turns off for no reason and won’t turn back on.  It attempts to and gets to the first screen but then stops and tries again, continually.  If the phone is charging it will allow me to start it again and it doesn’t die.  The battery is charged.

Solution:  Before doing any troubleshooting make sure to backup your phone data first as we will tackle both the hardware and software side of the device. Try to follow the steps listed below to fix this issue. Move to the next step if the issue still occurs.

If the above steps fail to resolve the problem then this could already be hardware related. I suggest you have your phone checked at an authorized service center if this is the case.

Note 4 Freezes Then Turns Off When Optimizing Apps

Problem: The phone turns on gets to optimising apps then freezes and starts again. After doing this for about 5 minutes the screen stays black with a blue light in the top left of the phone. Then the light starts to pulsate. The phone does nothing unless the battery is removed. Then the process starts again. The phone has been reset using the buttons and the cache wiped as well. Suggestions?

Solution: Have you tried starting the phone in Safe Mode? If you are able to access the phone in this mode then I suggest you backup your phone data from here. Once this is done restart your phone in recovery mode then do a factory reset.

Other factors that could cause this issue is a faulty microSD card so make sure to take out the card if your phone has one.

A faulty battery can also cause this type of issue. To check if this is the case you need to connect the phone to its wall charger then check if the issue occurs. If it doesn’t then I suggest you get a new battery.