If you want to use clean energy to start charging your devices, it can be a little pricier, but over time could save you money in electricity — not only that, but it’s neat to see how the tech works, too. Follow along below, and we’ll show you the best portable solar chargers for the Google Pixel 2 XL!

First up is the Beartwo 10,000mAh Solar Charger. This Solar Charger has a capacity of 10,000mAh and is primarily charged from a wall outlet; however, if you’re in a pinch, you can set it up to charge from the sun. It’s only made to charge like this in a pinch, simply because the area that solar panel covers is so small. Because of this, you’re going to get a super slow charge, and that’s if there’s optimal light out.

There are two USB ports, allowing you to charge two devices simultaneously. With a fully charged Solar Charger, you should be able to charge your Google Pixel 2 XL up to 2.5 times, with a little juice leftover. 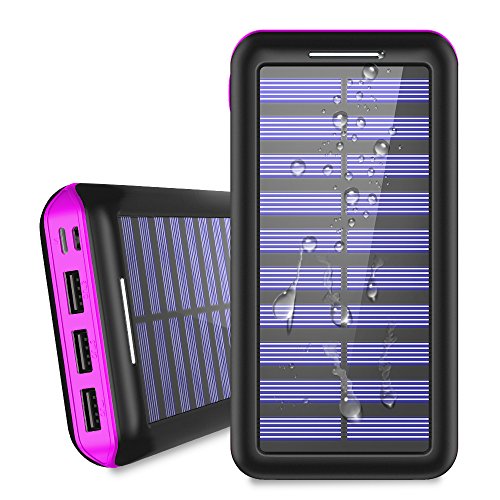 The AllSolar Power Bank operates similarly to the Beartwo; however, it has a much higher capacity at 24,000mAh. A Google Pixel 2 XL can be charged up to 6 times if the Power Bank is its full capacity, and you’ll still have some juice left over for other devices, or if you need to keep your device charging until you can get home or in the car. You can charge it by wire, but you can also charge it through the integrated solar panel. It’s worth noting that AllSolar says you should only do this in a pinch, as the concentrated heat can hurt the battery cells inside.

This particular power bank has an excellent lifespan, lasting well over 500 charges.

The Dizaul Portable Solar Bank isn’t a bad solar bank either! It has a much smaller capacity than the rest on this list — just 5,000mAh means you’ll be able to charge up your dead Google Pixel 2 XL to full just once with some juice leftover. The Solar Bank can be charged through the integrated solar panel, but the charging is super slow because the amount of area the solar panel covers is rather minimal. That’s why the Dizaul Portable Solar Bank is so small in capacity — you’d be spending days and days to charge anything larger than that fully.

This Solar Bank has some nice outdoor features though — resistance to water, shock, and dust. Not only that, but you can charge two devices simultaneously. Unfortunately, the charging isn’t very fast, though.

Now, forget Solar Banks. What if you want to charge a device — relatively fast — through solar power? In that case, consider the Anker 21W Solar Charger. It’s the only purpose is to charge a device through solar power, so it doesn’t store a charge at all. On a sunny day, spread out your Anker Solar Charger, hook up the device you want to charge to it, and it’ll start charging it reasonably quickly. It can actually charge your device at up to 2.4 amps per port. The solar panel coverage is actually quite substantial, so you’ll be able to charge things quickly.

Last up on our list is the RAVPower Solar Charger. It works similarly to the Anker Solar Charger but has about 3 more watts of power. It’s also more efficient, meaning you’ll get a quicker charge on a sunny day. It also has some built-in technology to recognize what device you’re charging, and then base the charging speeds off of what device it is. So, if it recognized your Google Pixel 2 XL, the charging would be pretty fast. Three USB ports mean you can charge up to three devices simultaneously.

So, which Solar Charger should you get? We recommend the RAVPower 24W Solar Charger — it’s just a little better than the Anker mode and ensures that you’ll get a faster charge. If you’re looking for more of a Solar Bank, we recommend going with the Beartwo 10,000mAh Solar Charger, as it also doubles as a conventional power bank (i.e., being able to charge by wire).