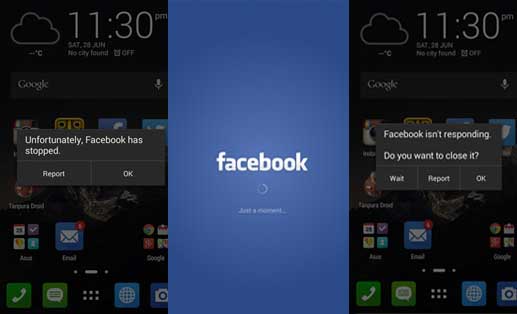 Being one of the most popular apps in the Play Store, we already expected that we’ll receive more Facebook-related complaints from our readers. So, in this post, I will address the most common issues that were reported to us.

Try to go through the links below and see if your concern is one of them. Click on a link to jump to a specific problem:

For our readers who have other concerns, visit our S7 Edge troubleshooting page and try to find issues that are similar to yours. Feel free to use the solutions we suggested. If you need further assistance, then you may contact us by completing our Android problems questionnaire. We are always willing to help as long as we have all the information we need to troubleshoot the problem so please be as detailed as possible.

Q: “I need your help. My Galaxy S7 Edge is showing some kind of an error message it says, “Unfortunately, Facebook has stopped.” I can only click on OK or REPORT but either way, it doesn’t help because the next time I open facebook, it says the same thing. I’m not really a tech person so I don’t want to change anything in my phone for fear that I might mess it up even more. Can you guys instruct me what to do to fix this problem? Thanks a lot.”

A: If this problem started out of the blue, it might just be a minor app crash. So, in this case, here’s what you need to do to try to fix the “Facebook has stopped” error on Galaxy S7 Edge:

That’s right. All you need for now is to clear the cache and the data of the Facebook app since we don’t know for sure what caused the error. However, if the error won’t go away after that, try to isolate the problem because there’s a chance that other apps are causing it considering Facebook is connected to many apps for sharing. So, at this stage, boot your Galaxy S7 Edge in safe mode:

In this state, try to open Facebook and see if the error pops up and if so, then it might be a firmware issue considering FB now comes pre-installed in your phone. Now try to see if there’s an update available for Facebook through Play Store. Should the error persist after updating the app or if there’s no update available, then you have no other choice but to reset your phone and I suggest you do the master reset as it’s more effective than just the factory reset.

I understand that an issue with the Facebook app is minor but as you see, simple troubleshooting procedures won’t fix it and unlike before, you can longer uninstall the app and re-install it (unless you’re rooted).

Q: “Frankly, I  bought the Galaxy S7 Edge because I love taking pictures and share them on my timeline on Facebook. So aside from text and calls, I use my phone mostly for FB but I’m bugged by one problem; the app keeps freezing and when it doesn’t freeze, it lags like a lot. When it does these things, I’ll just close the app and open it again but it’s not a guaranteed fix. It may work after that, it may not. Sometimes I have to reboot my phone but that too may not fix the problem. What I really want is to be able to use my phone, do Facebook and won’t have to deal with these issues? Can you guys help me out? Thanks.”

A: You never mentioned how this problem started or what could have led to this problem. If it started without apparent reason, try clearing the cache and the data of the Facebook app. If there was an update prior to the problem, then you might just be dealing with some corrupt caches. For this, all you need to do is delete the system cache:

If all else fails though, try to do the factory reset.

What to do if Facebook app force closes immediately after opening

Q: “Facebook app closes immediately after I open it on my Galaxy S7 Edge phone. It hasn’t been a couple of months since I purchased it but it seems like it’s causing a lot of trouble. One of the things that I hate the most, however, is the Facebook app won’t open. I mean it just closes when I tap to open it. It just started recently, I think it was after the update. What needs to be done?”

A: It’s basically just the same as the first I problem I cited above only that it doesn’t return an error message but nonetheless, the app crashes. Try to follow the same troubleshooting procedures I suggested as I’m certain one of them could fix this. As a workaround though, use the web browser or the Internet to access your Facebook account.

Q: “Before I bought this phone, I owned the Galaxy S5 and S4 before that. With those phones, I could sync my Facebook contacts and they appear in my Contacts app. However, this new and more powerful phone won’t do such a thing anymore. Why is that? How can I make Facebook sync with my Contacts? ”

A: It is because such feature is no longer supported by Facebook and the fact that the app comes pre-installed with the phone means you can’t back date an APK to install a version that still support such feature. In other words, there’s nothing we can do about it anymore.

No one except Facebook knows why this feature was trashed and we don’t know if it would be implemented again in the future.

Q: “I’ve been having issues with Facebook as of late and I already tried everything like clear it’s cache and data and those other things you suggested like deleting system cache and safe mode. What I want to do now is to just uninstall it and re-install a new version but my Galaxy S7 Edge isn’t allowing me to do so. How can I uninstall it?”

A: The official Facebook app is already pre-installed on your phone that’s why it can’t be uninstalled. Apparently, the uninstall-reinstall procedure won’t work with it now. So, if you’re having issues with it and you’ve already done the app-level troubleshooting procedures to no avail, then troubleshoot the firmware instead. You already did the wiping of the cache partition, I think it’s time you did the master reset just to fix these issues.

When Facebook app is open, Galaxy S7 Edge slows down or lags

Q: “All other apps work fine but when I open Facebook, my phone seems to slow down and there are instances of lags. Is the app that heavy that a powerful phone like the Galaxy S7 Edge is having a hard time running it? What do you guys think about this?”

A: Well, I think the app has some issues and it may seem like the phone is the one slowing down or lagging but it’s the app; it’s all Facebook. That said, these are the things you should do to try and troubleshoot this problem: