The original Fitbit Versa was a great fitness tracker and a promising smartwatch. The Fitbit Versa 2 is venturing further into the smartwatch territory without forgetting its fitness roots. 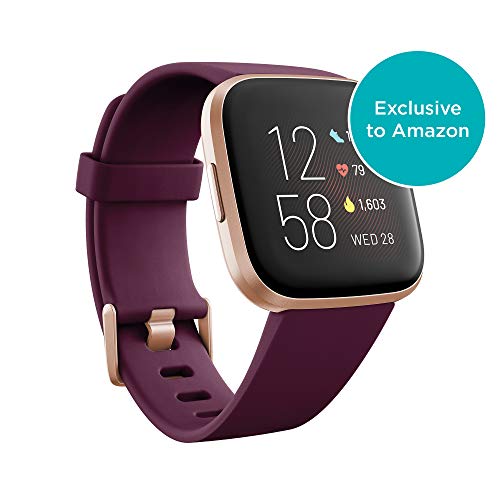 From a distance, it’s easy to mistake the Fitbit Versa 2 for the Apple Watch. Both have a squarish design that places the display at the very center of attention and a watch band that seemingly comes out straight from the case.

The original Fitbit Versa had three buttons, one on the left side and two on the right side. The Versa 2 has retained just the left button, which now serves as both the select and the back button. You can also hold it to bring up Amazon Alexa.

We appreciate that the Versa 2 has slightly thinner bezels than the original Versa while retaining the same case size (40 mm). It’s also compatible with all Versa bands on the market. Kudos to Fitbit for not making us spend money on a bunch of accessories.

According to Fitbit, Versa 2 should is water-resistant up to 50 meters, which means that you can swim with it but shouldn’t dive with it (water resistance on watches is weird, but this guide does an excellent job of explaining it).

Arguably the most significant improvement over the original Versa is the new AMOLED display, which now supports always-on functionality. The difference between the old and the new display is immediately obvious when you choose a darker watch face because black pixels on the AMOLED display are genuinely black.

The new display is also pleasantly crisp thanks to its resolution of 300 x 300 pixels. Its brightness can reach up to 1,000 nits, so you won’t ever have a problem reading your notifications. Since the Versa 2 has a built-in ambient light sensor, it can automatically adjust the brightness of the display for improved battery life.

Thanks to the new processor, navigating the Fitbit Versa 2 is a smooth experience. The interface rarely stutters, making the whole smartwatch feel confident and reliable.

The Versa 2 comes with 5 GB of storage, but only 2.5 GB are accessible to users. That amount of storage space allows you to keep around 300 songs on the smartwatch, but you must transfer them over Wi-Fi using the desktop Fitbit app.

The original Versa was already a reliable fitness companion, and Versa 2 is even better. The smartwatch has several different exercise modes to choose from as well as the expected ability to measure your heart rate, estimate burned calories, and count steps.

New is the ability to evaluate the quality of your sleep and score it on a scale from 0 to 100. This feature is available only to Fitbit Premium subscribers. Fitbit Premium comes at either a monthly or yearly cost, and it offers personalized coaching with helpful fitness guides.

As we’ve mentioned earlier, you can now invoke Amazon Alexa by holding the side button and talk to it through the built-in microphone. Alexa on the Versa 2 works just like the Alexa app on your smartphone, so you can use it to get information, control connected devices, and more. On Android devices, you can use Alexa to reply to text messages, but this feature, unfortunately, doesn’t work on iOS.

While the Versa 2 ships with the Spotify app preinstalled, it’s worth noting that the app acts only as a remote for controlling music playing on your smartphone. Fitbit may introduce the ability to store your Spotify playlists later, but no official announcement has been made yet.

You will also depend on your smartphone when changing watch faces or time zones, which is probably the biggest complaint we have, especially because the Fitbit app likes to take its time when transmitting information to the smartwatch.

On a charge, the Versa 2 lasts a little over 5 days of full use, without avoiding sleep tracking, notifications, NFC payments, and other features. Activating the always-on display functionality cuts the battery life in half, leaving you with around 3 days of use.

Unfortunately, the Versa 2 isn’t compatible with the original charger because Fitbit redesigned it from the ground up to improve charging performance.

All in all, the Versa 2 is one of the longest-lasting smartwatches you can buy at the moment. Unlike many other fitness-oriented smartwatches with long battery life, it offers a lot of smart features that allow it to compete with the likes of the Apple Watch.

Whereas the original Versa was a great fitness tracker and a promising smartwatch, the Versa 2 capable everyday companion with improved features, versatile design, and a budget-friendly price tag. All of its limitations are fairly easy to overlook if you carry your phone with you wherever you go, earning it a place among the best Android-compatible wearables.