The tablet market is overflowing with devices that target just about any use case imaginable. Some tiny display tablets come in lightweight construction and are perfect as ebook readers. Larger tablets with high-definition displays can be great for multimedia consumption, while convertible tablets with detachable keyboards can be used as a full-fledged laptop replacement. However, most of these devices are not designed to withstand rough handling and outdoor use. Manufacturers expect that you will keep your tablet protected from the elements, ensure that you won’t accidentally drop it on the ground, or expose it to extreme temperatures.

Luckily, some exceptions exist, and we took our time to examine what the rugged category of tablets has to offer to recommend to you the best rugged tablet currently available on the market. Such a tablet is perfect for professionals who need to use it right on the job site. Small children who are still too clumsy to handle a regular tablet, businesses that intend to use it as a point of sale device, and just about anyone else who values durability above everything else. We have narrowed our selection down to just two tablets: one smaller and one larger. As a bonus, we also cover two great alternatives that are worth considering as well. 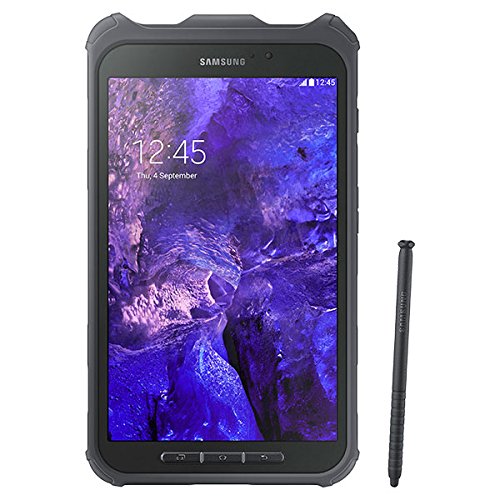 The Samsung Galaxy Tab Active is Samsung’s first rugged tablet, designed for individuals with an active lifestyle. It was first released at the end of 2014 and is still very much relevant to this day. The 8-inch device is packed with advanced connectivity features, capable hardware, and, above all, features very durable construction that deviates from Samsung’s typical sleek design and smooth, curved lines.

We have to say that for a rugged tablet, the Samsung Galaxy Tab Active is a lovely device. The black and gray design looks clean and professional, and the removable backplate, which hides the replaceable battery, makes you feel that it will survive just about everything. Indeed, the tablet is IP67 certified to be dust and water-resistant up to 1 meter and 30 minutes and survive up to 1.2 meters drop.

The front side resembles regular Samsung tablets: there’s a small oval speaker grill on the top and three physical navigation buttons on the button. The device also hides a small pen, which can be used to navigate the operating system, draw diagrams, or precisely input text. It’s also fantastic for people who have to wear protective gloves, as it allows them to keep them always on.

The 8-inch TFT display has a resolution of 1280×800 pixels (189 PPI). Even though this resolution is only half of what Samsung puts in their latest devices, it’s still clear enough for comfortable everyday use. The most important aspect of this display is how easily readable it is under direct sunlight. You don’t even need to crack up the brightness to the max to see what’s on the screen. Viewing angles are equally pleasant, and your coworkers will have no problem understanding what you have to show them even if they don’t stand directly in front of the tablet.

The Samsung Galaxy Tab Active is powered by the Qualcomm Snapdragon 400 chipset with Quad-core 1.2 GHz Cortex-A7 processor and Adreno 305 GPU. This entry-level SoC (System on Chip) has never been known for being the most powerful chip out there, but it still holds surprisingly well to this day. No, you won’t be playing any latest high-fidelity 3D games on this tablet. Its primary target is someone who needs to access the web, view and edit documents comfortably, takes the occasional picture, and use a selection of production-oriented applications.

The built-in 4450 mAh battery can get you through the entire day of moderate to heavy use. That’s mainly because of the excellent software optimization and a lower-resolution screen. If you don’t mind the extra weight, you can also pack a portable battery charger and extend its life on the go. Some newer chargers pack more than 20,000 mAh worth of battery capacity, which means that you could charge this tablet, at least, 3 times.

What’s more, the battery is removable, so you can replace it with a newer one when the original begins to lose its capacity. Replacing it during the day is somewhat cumbersome because you first need to remove the backplate held by 4 screws.

The Samsung Galaxy Tab Active includes two cameras: 3.15 MP in the back and 1.2 MP front-facing self-portrait one. The primary camera can record 720p video at 30 frames per second and has an LED flash for low-light situations. The picture quality is nothing to brag about, and you probably won’t find yourself using any of those two cameras very often. Still, it’s nice that they are there for when you might need to document something without having anything better that you could use.

Professionals who would like to use this tablet outdoors will be pleased to know that the built-in navigation system is among the best we have ever come across. It’s compatible with GPS and GLONASS satellites and always connects incredibly fast, and the signal stays strong no matter where you are.

If you want a small, durable tablet with long battery life and enough performance to do just about anything you could realistically want from it, the Samsung Galaxy Tab Active is a great choice.
Get It Now On Amazon 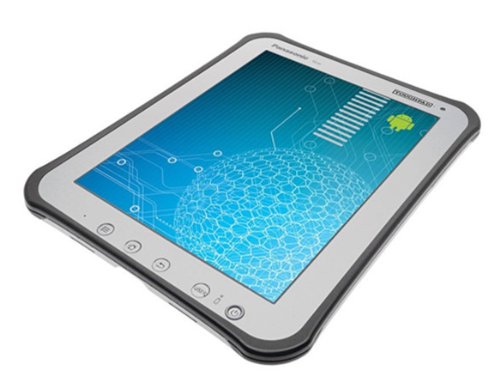 The Panasonic Toughpad FZ-A1 is an enterprise-grade rugged tablet with a 10-inch screen and impressive battery life. Needless to say, the tablet is meant for industry professionals who can bear the extra weight and thickness.

This tablet is a rugged beast. Weight 952.5 g (2.10 lb) and being almost 2 cm thick, it has much more in common with smaller laptops than it does with other tablets. But make no mistake, the extra weight and size have been put to good use, as the magnesium alloy chassis encased with ABS and elastomer received the MIL-STD-810G and IP65 certification. Simply put, you can put this device through anything, and it will survive with just a few scratches.

The 768 x 1024 pixels (127 pixels per inch) LCD doesn’t impress with its resolution, but that’s because it has a few other tricks up its sleeve. For starters, the display is coated with an anti-reflective and anti-glare layer, making it easily readable under direct sunlight. Additionally, it has a special touch layer that allows owners to use styluses for precise input and signatures.

By far, the biggest downside of the Panasonic Toughpad FZ-A1 is the performance. Tablets and smartphones have come a very long way during the last 5 or so years, and the outdated dual-core 1.2 GHz Marvell CPU doesn’t cope well with modern applications and heavy multitasking. Installing the latest version of Android OS would probably be a painstaking task, which cannot be recommended to anyone. The fact that there is only 1GB of RAM doesn’t help either.

The large case of this tablet hides an equally large Li-Ion 4590 mAh battery that can last an entire day. You don’t have to think twice about purchasing a used model, because you can easily remove the back cover and replace the battery by yourself.

The Panasonic Toughpad FZ-A1 features two cameras: 5 MP in the back and 2 MP in the front. Both offer decent image quality and will work fine for the intended purposes. Just don’t expect them to reveal any details in the shot or cope well with bad lighting conditions.

The Panasonic Toughpad FZ-A1 is a capable device that still has a few years of good use left in it despite its relatively old age. That’s mainly because Panasonic wisely decided to make the battery easily serviceable, thus allowing owners to expend the life of this device virtually infinitely.
Get It Now On Amazon 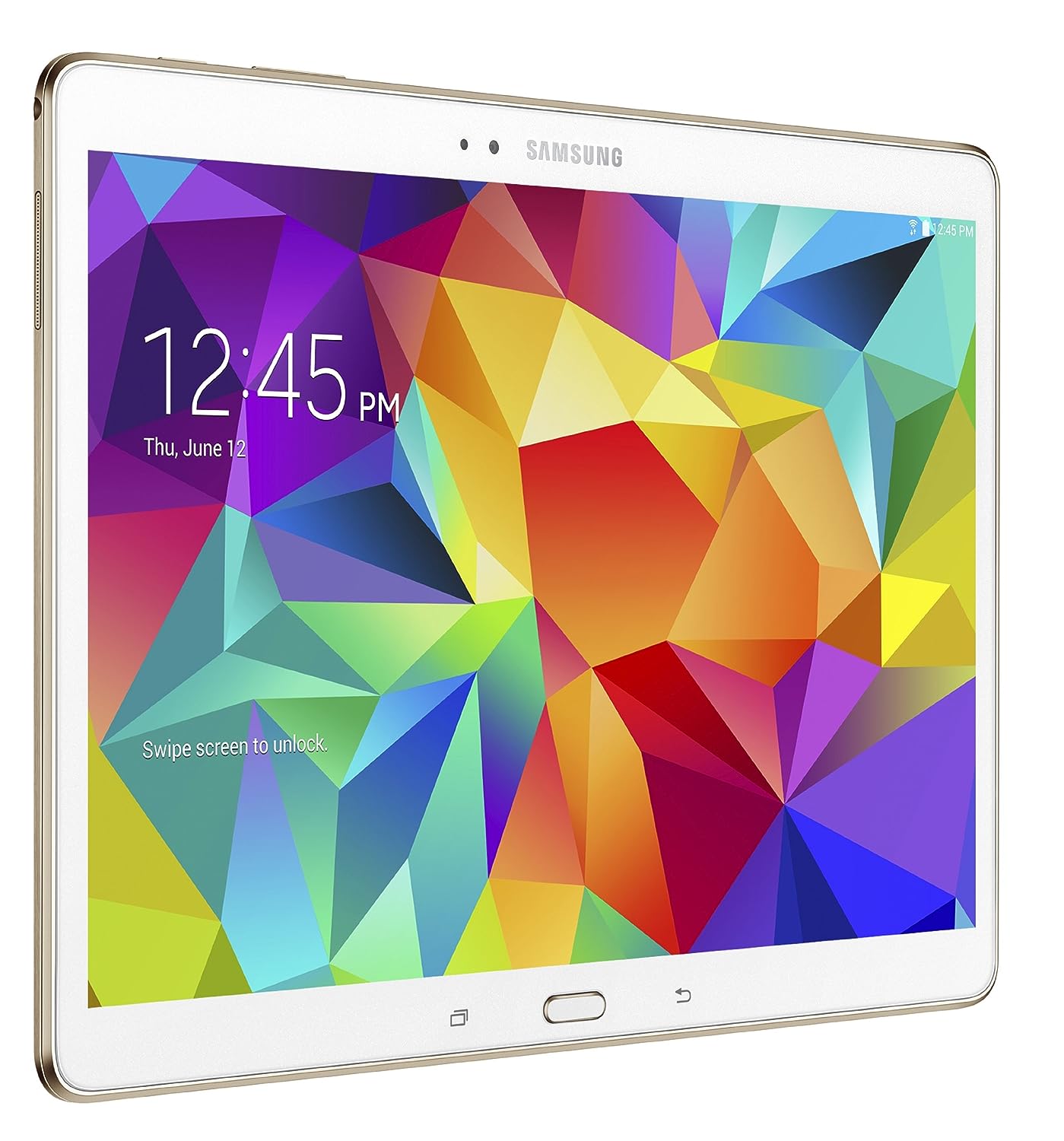 One good alternative to rugged tablets is to pair a regular tablet, such as the Samsung Galaxy Tab S, with a durable protective case. The Bobj Rugged case has been designed specifically for the Tab S, and it helps to protect the device from shocks and drops. It’s available in 5 different colors, which means that you can match it with your company image, and the unique interior cooling system ensures that your tablet will stay operational even during scorching summer days.

The tablet itself features a powerful Exynos 5 processor (1.9 GHz Quad Core + 1.3 GHz Quad Core) with 3 GB of RAM and 16 GB of internal storage space. The beautiful 10.5-inch Super AMOLED Display with 2560×1600 resolution is one of the very best that you will come across. It’s perfect for multimedia consumption, working with large documents and PDF files, and the 8 MP rear-facing camera allows you to leave your point-and-shoot camera at home.

Samsung has included some pretty great features that you won’t find anywhere else. The Multi Window feature allows you to use two applications side-by-side, which is extremely useful for referencing two documents or composing an email with the aid of information displayed using the web browser. The built-in fingerprint scanner dramatically enhances the overall security of the device and guarantees that nobody can access your personal or business data. Last but not least, the large non-removable Li-Ion 7900 mAh battery can last up to 11 hours of moderately heavy use, allowing you to use the tablet without charging through the entire day.

The only downside of using the tablet inside the rugged case is that you will still have to keep it protected from the elements. This means that using it in the rain or is very dusty environments could prove fatal for the device.

Get Samsung Tablet Now On Amazon

Get Rugged Case Now On Amazon 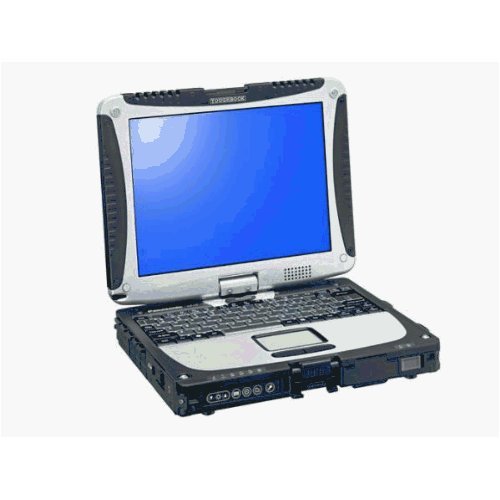 The Panasonic Toughbook 19 is the latest iteration of the most popular line of rugged laptops in the world. What stands behind this success is Panasonic’s ability to create an extremely reliable product that meets all dements of professionals in many different fields across the globe. The laptop is jam-packed with innovative technology that you won’t find in any consumer-grade laptop.

Despite the slightly misleading name, the Panasonic Toughbook 19 has a 10.1″ LCD touch-screen display with unique backlight technology that uses direct sunlight as a source of illumination, allowing it to be as bright as 6000 nits (a unit of luminance equivalent to one candela per square meter).

The machine is powered by an Intel Core 2 Duo SU9300 processor and comes with 2GB of RAM, which can be expanded to up to 8GB. The 160GB HDD sits in a special protective enclosure, which helps it resist shocks, and the included quick-release mechanism makes it possible to remove the disk in just a few seconds to save data in case of an emergency. However, it’s improbable that you would be unfortunate enough ever to get yourself in a situation that the Panasonic Toughbook 19 wouldn’t survive. The laptop is a 6-foot drop and IP65 certified and capable of resisting water splashes from all directions.

The large built-in, removable battery lasts up to 9 hours and can be removed and replaced on the go. The aluminum chassis comes with expansion slots for a fingerprint scanner, GPS, second LAN, ExpressCards, and many other devices.

If everything sounds too good to be true, that’s because there’s a small catch: the laptop is expensive for a relatively basic configuration with outdated hardware. For comparison, you can get many times as powerful machines without the ruggedness of the Panasonic Toughbook 19 for much less.

We hope that our overview of some of the best rugged tablets on the market helped you decide which is the right one for you. If you are still uncertain, consider asking your employees and coworkers about their opinion or check out some online video reviews.
Get It Now on Amazon